While these numbers reflect the impact Android’s massive market share is having on the app industry, it’s worth noting that of the two app stores, the Apple App Store’s market is still the largest, and continues to see more than two times the revenue of Google Play.

That latter figure varies a bit from an earlier report put out by competing analytics firm App Annie in April, which found that Apple’s App Store earned around 2.6 times more revenue in the preceding quarter. But not only do the firms’ methodologies differ in general, Distimo looked at the earnings of all ranked apps in the 18 largest countries over 6 months, while App Annie’s data was, as noted above, for the quarter.

That being said, Google Play’s revenue growth is notable. While only 25 percent of the revenue from the two stores combined came from Google Play in February 2013, this went up 8 percentage points to reach 33 percent by July.

Overall, the U.S. still spends the most money on apps, followed by Japan and South Korea, who were the main contributors to Google Play’s revenue share. After the top three, were the U.K., Australia, Germany, Canada, France, Russia, and Italy. (One interesting side note here is that in Russia, more money was spent in the App Store for the iPad, than in the App Store for the iPhone.) 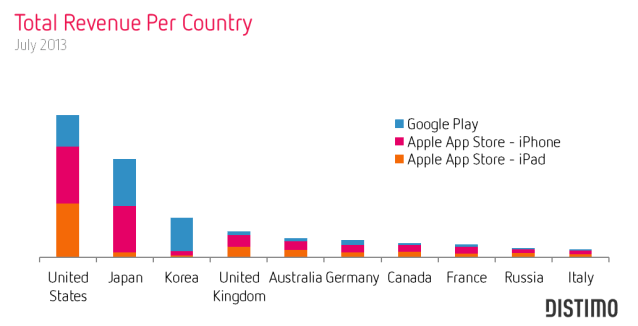 In terms of the top revenue-generating apps this past month, Google Play’s list reflects its heavy footprint in Japan and South Korea in particular. Though King.com’s Candy Crush Saga still reigns at number one, it’s followed by Japan’s Puzzles & Dragons, two apps for South Korea’s Kakao at spots #3 and #5, and Japan’s LINE at number 4.

Meanwhile, the top revenue-generating apps in the Apple App Store, in order, were: Candy Crush, Clash of Clans, Hay Day, Puzzles & Dragons, and The Hobbit: Kingdoms of Middle-Earth. 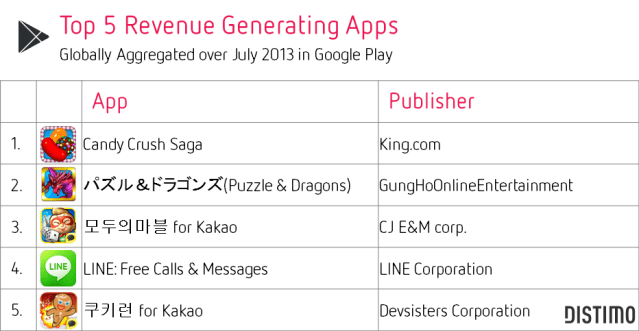 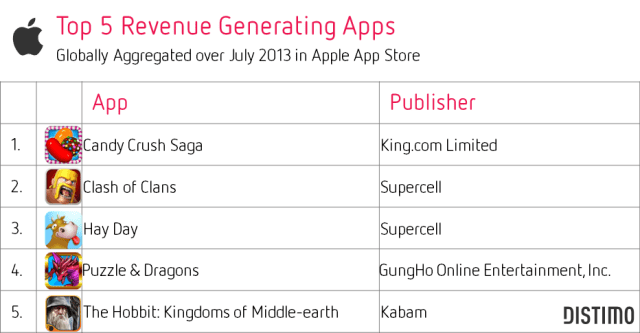 In terms of paid apps, Apple’s app store was largely games with the exception of WhatsApp in spot #4, while Google Play was a mix of games and utilities (like a keyboard, backup service, and launcher). 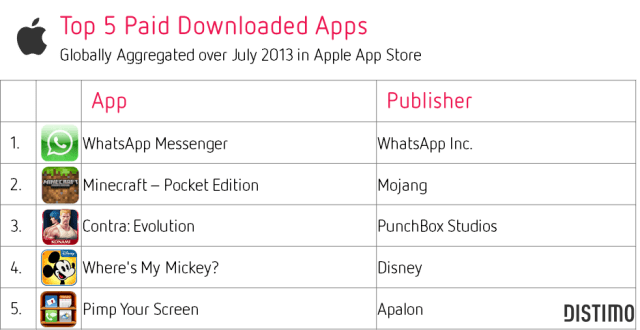 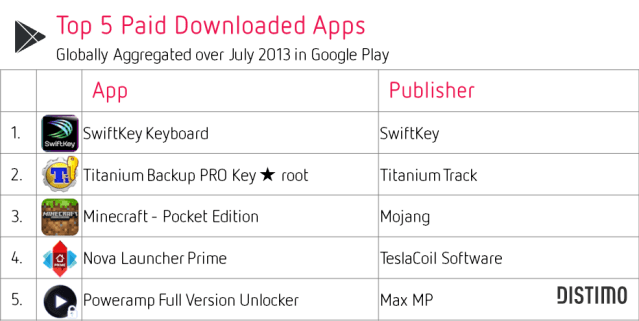 More details on top publishers, free apps, and more are in the full report.