Video chatting app Glide is on a roll of sorts. In recent weeks this mobile messenger for iPhone and Android devices has been climbing the app store charts on both platforms, having gotten as high as #6 overall in the Apple App Store, and #1 in the App Store’s social networking section. Today, the iPhone app is ranked #16 in the U.S., Glide’s top market – just one spot below Instagram, according to AppData’s leaderboards. But on the iPhone App Store on the phone, it has actually bumped Instagram from spot #15 in the U.S.

Glide’s exponential growth appears to have taken off this June, when the viral nature of the app’s invite system began to pay off. The company claims it hasn’t paid for advertisements, or, as Glide Marketing Director Guy Gordon put it, “thank god we haven’t had to spend too much on [user] acquisition – all of our growth is organic and viral,” he says. (Glide currently has just $2 million in seed funding, and the cost to acquire a loyal app user has been anywhere from $1.29 to $1.50 over the past several months, according to mobile app marketing firm Fiksu.)

When we reached out to Jerusalem-based Glide, Gordon was the only exec available to speak because the company’s founders, Adam Korbi, Jonathan Caras, and Ari Roisman, were all traveling throughout the U.S., for various reasons. (Cough, fundraising, cough).

However, some of that “viral” growth may be manufactured, even if not directly paid for. App Store reviews are filled with users who had unwittingly spam-vited everyone in their address book to Glide. The app, by default, checks all your contacts which you then need to uncheck if you don’t want to send out invites to everyone. Plus, the pre-written message the app uses is something along the lines of “I’ve got something to show you on Glide,” making it sound like there’s content waiting – not just an invite to use the app. (You can edit this message, but that may have gone unnoticed.)

You can also see here how Glide is climbing in the U.S. App Store, but not elsewhere in the world – another indication that the app is taking advantage of SMS spamming because of the low cost in the U.S.

Private messaging apps like Glide are always walking a delicate balance between wanting to maintain a sense of privacy, and wanting to blow up big. This too often results in reports of address book spamming from users who pushed the wrong button, so to speak. Path, for example, has been guilty of this more than once, and even had its hand slapped by Facebook, which pulled its “Find Friends” access. Glide could be next if it’s not more careful. That being said, even a wonky invite system can’t keep sky-high valuations at bay, it seems. 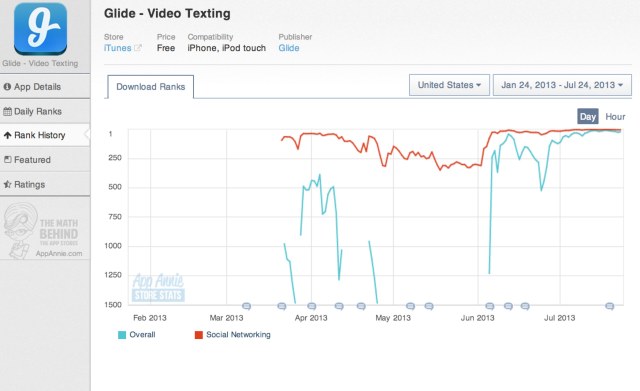 Where Glide Fits In

Glide’s mobile messaging app, or “video texting” app if you will, launched in March, and then later debuted its Android beta at TechCrunch Disrupt NY 2013. The service, for those unfamiliar, can be described as something of a video-centric walkie-talkie, except that it not only allows for live video messages, it also lets you send video messages that can be viewed later on. That puts Glide in the mobile messaging sub-category that includes apps like Tango, which also offers video voicemail (among many other things), more so than it puts the app up against voice and video calling services like Skype or ooVoo, for example. 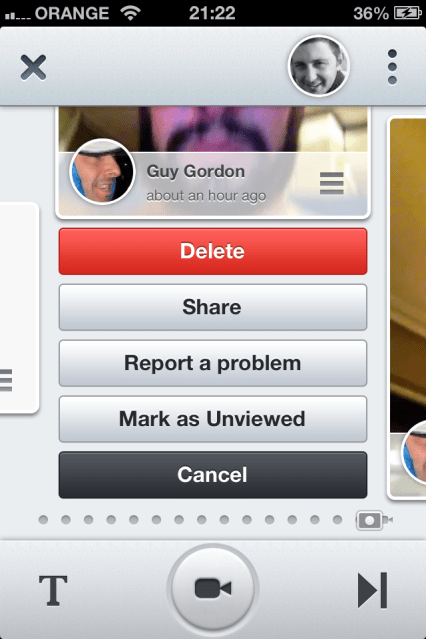 Recently, Glide made a move which could offer some competition to another group of video sharing apps, like Vine or Instagram, the latter of which, though known for photos, now does video, too. Responding to user demand, Glide quietly rolled out a new feature a few days ago which allows users to share their own video messages more publicly, if they choose. Links to the Glide message can be posted on Facebook or Twitter, or sent to others via SMS or email. The company plans to offer an embed code option in the future, as well.

To be clear, users are only allowed to publicly share their own messages, not those they receive from others. Gordon explains that Glide is being cautious with how this sharing feature is being implemented, because the company doesn’t want to risk its reputation as a private messaging service. “It does not reposition us as a video sharing site,” he says. “That’s a whole other category as far as we’re concerned…But we hope it will help in the viral growth and spread of the app.” (Gotta go viral, right?)

While the addition of social sharing is notable, it may not be the biggest change the app is yet to see. Glide is also currently facing a deluge of requests from users who want the app to offer an alternative way to login besides using Facebook, which is the authentication mechanism the app currently offers. 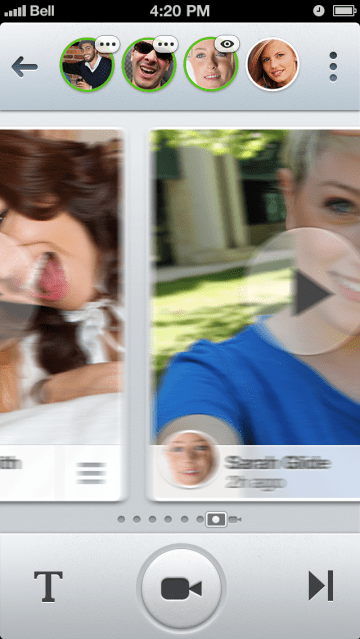 Glide’s users tend to be young, ages 13 or 14 through college-aged, roughly speaking. And they don’t seem to care for Facebook.

“Despite the global domination of Facebook – everything thinks that’s the gold standard – we’ve been quite surprised by the animosity and the enmity that a lot users feel towards Facebook,” Gordon explains. “People write with righteous indignation – like, how dare we force them to use Facebook.” He says that Glide’s biggest drop off in terms of conversion rates between those downloading the app, then signing up is due to its Facebook-only nature.

The company has now committed all its development resources to building out an alternative to Facebook, or maybe even a replacement. The concern from Glide is that Facebook is going to pull its “find friends” functionality if the Facebook authentication mechanism gone, and given the situation described above, that’s likely a valid fear.

Whether Glide is the product of attempts at growth hacking, actual enjoyment leading to everyday use, or some combination of both, that’s something only the test of time eventually proves. For now, it’s worth at least keeping an eye on.

The company is planning to disclose additional metrics in a couple of weeks time, but Gordon says Glide is “well into the seven figures” on Google Play, in terms of downloads. (Google Play shows 1 – 5 million installs). And we already know it takes some 23,000 downloads per day to crack Apple’s top 50, as of late. Glide also has more Android users than iOS users – despite the app’s later launch on that platform, it now accounts for 60 percent of the user base.

If the company succeeds in scoring new funding, the plan will be to improve its localization support, and hire more developers for product improvements. Stay tuned.

While this story was meant to cover the nature of Glide’s invite system and other aspects to its service, it was pointed out following publication that Glide had bought Facebook ads, and had paid a company called Nanigans. However, Glide responded to us claiming that is not the case. Says Gordon, “we never spent any money with Nanigans, we have never been their client,” and “I can confirm that we have absolutely no connection to them and I have just written to them personally to set the record straight about the false accusations raised…”

He also adds, “to clarify what I said in the interview, our exponential growth, which only started in the second week of June, was indeed organic and was triggered by the debut of our Android app on the Google Play Store and fueled by users telling their friends about Glide through the new SMS-based invite system we launched at that time.”

That comment gives further credence to the fact that it’s the SMS invitations that are fueling Glide’s growth, and based on App Store reviews (and comments below!) many users are not intentionally sending these invites out.

Gordon also wants to clarify the spirt of his comment was not to imply Glide had never spent money on ads, but that it achieved its growth without needing to spend money on ads. He says, “we did in fact run several in-house test campaigns on Facebook starting in December 2012 when we soft-launched on iOS in Israel. The total amount we’ve spent since then is only around $60k as these were mostly A/B experiments to test different creatives in various markets in the hope of finding an effective UA approach. We discovered that the associated costs were too high and understood that we weren’t going to realize the growth we were hoping for. So we decided not to invest in advertising but rather to focus efforts on building a simple invite system, which many users had requested.”

Nanigans representative Laurie Cutts says Glide was not a Nanigans customer, and that the blog post which made it seemed that way was meant only meant to serve as a great example of an effective Facebook ad.