Facebook’s social graph went missing from yesterday’s update to Path‘s smartphone app, and Facebook now confirms it has restricted Path’s API access. Path can no longer look up your Facebook friends, which prevents it from sending them invitations or suggesting you follow them. The move may be in response to Path spamming user’s contacts with invites last week.

However, those apps were formally cited as competitors. Facebook didn’t say exactly why Path lost access, leading me to believe the spam controversy may have been responsible. It was caught sending out text message invitations to users contacts at 6am last week, leading to significant backlash. Facebook hates being associated with spam, and its platform policies say it can remove API access from apps it thinks are being too aggressive. We’ve reached out to Path for its side of the story. 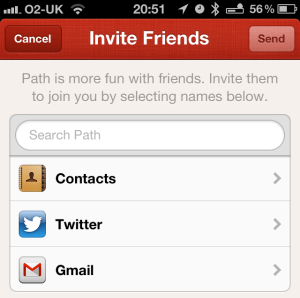 Until now, Path has let users invite their Facebook friends to download the app, and easily follow friends who already use it. But while you can still invite people from your Contact Book or Gmail contacts in the new 3.0.4 version of Path, the options for Facebook vanished. Oddly, Path’s own customer portal still bears the image of the old app, with Facebook plain to see.

Suffice it to say that losing the ability to invite Facebook friends could hinder the growth of Path, which hit 10 million registered users last week. The more networks the merrier, right? But people can invite their closest friends via text message or email. The bigger issue may be that it’s now harder to develop a micro-social graph on Path because you can’t just choose a subset of your Facebook friends. If you don’t follow or get followed by the right people, Path isn’t nearly as fun, and you won’t use it as much. 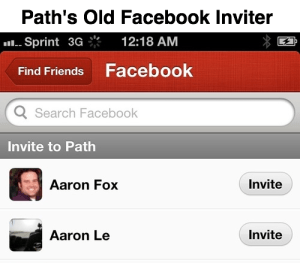 Possibly in an attempt to fill the void, Path has added Twitter, which could be quite fruitful for bringing in new users. Currently, Twitter users have no ability to create a more private network for close friends – unless they choose to lock their account – which is hardly the point of Twitter, a network which thrives on the oxygen of the public sphere. Twitter’s userbase skews more toward early adopters who might be interested in Path than Facebook users.

Despite the replacement, Facebook dropping the hammer is a serious blow to Path. Considering many believe it has a high churn rate and it refuses to provide active user counts, Path probably needs to be pulling in users however it can.

Update: A different perspective on this situation is that Facebook felt threatened by Path’s growth and recent move into private messaging. By cutting off Path’s access to its social graph, Facebook could hamper its growth and prevent it from gaining more momentum. Some believe Facebook’s on-boarding flow can also lead people to accidentally send invites too. We’ll be looking closer at this issue.