Groupon is in late-stage negotiations to acquire Silicon Valley-based startup Clever Sense, we’re hearing from a source. Clever Sense is the company behind Alfred, a popular ‘butler’ app for iPhone that makes restaurant and activity recommendations based on your taste preferences. The company was founded in 2008 and has raised around $1.5 million to date.

Clever Sense declined to comment, and we’re waiting to hear back from Groupon.

If you haven’t used it before, Alfred might sound a lot like Yelp, and various other recommendation engines. The key difference is that Alfred is focused on keeping the number of taps required to generate a recommendation to a minimum — based on the time of day, the restaurants you’ve eaten at previously, and other factors, the app can generate a recommendation for lunch or coffee in a tap or two (find our past coverage here and here).

With that in mind, it’s a logical fit for Groupon. The app itself could help Groupon expose new restaurants (presumably ones that are running deals) to users. And the technology behind Clever Sense involves more than meets the eye — the company has previously discussed how in addition to collaborative filtering, which creates recommendations by looking at users who are similar to you, the service also uses model-based learning, which means it establishes a unique taste profile for each user.

I’m no expert on machine learning, but it seems to work — Alfred has over 1000 reviews on iTunes, with a four star average.

Here’s a video explaining the app: 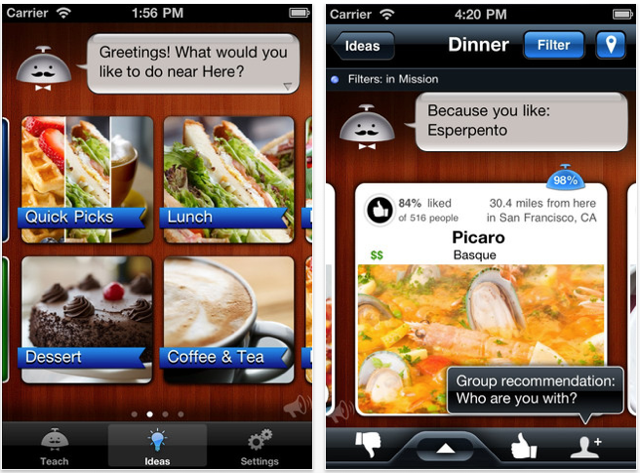