Today at Facebook’s big news feed announcement, it made photos for users bigger, but the ads in the news feed will be getting bigger, too. “We’re taking all the content you see in the feed and making it more immersive. So that goes across the board for everything, including ads” said Facebook’s head of product design Julie Zhuo. Pages may get more views thanks to the “Following Feed” but there are Page-less feeds on Facebook now, too.

Mark Zuckerberg and the other Facebook big wigs didn’t even mention advertising during the presentation. They only discussed them when prompted during the Q&A.

Here’s how the design changes will affect advertisers, though. Facebook cleaned up its UI to give more space in the central feed for photos. When businesses buy feed ads that feature a photo, those photos will be bigger. This could lure more luxury brands who are used to larger homepage takeovers and glossy magazine ads.

Websites other than Facebook will get a better chance to strut their stuff now. Facebook showed off a richer view of content shared from Pinterest, which should be good for that image-sharing site and the e-commerce merchants it drives traffic to. Zuckerberg also said Quora and other sites would get a boost, too. Links shared to the site will have bigger blurbs, which could benefit serious publishers with great prose, but might penalize link-bait headlines that try to mislead people into clicking. 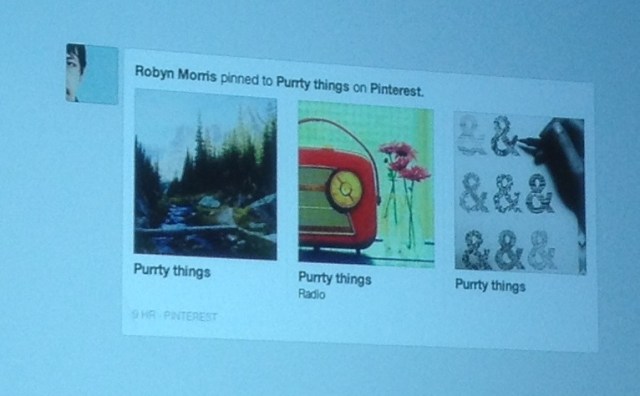 Facebook also will start letting users choose between different content-specific feeds. This could benefit or hurt business Pages and professional publishers depending which feeds a user frequents. The Pages-only feed is now more prominent, and called “Following.” Here users will see all the updates from the Pages they Like and the public figures they’ve subscribed to. This could be a win for Pages and professional content-creating individuals because before, their followers would only see the best of their updates due to the way Facebook filters the default news feed. Now people voracious for the stories have a better way of finding them.

On the flip side, there are now areas of Facebook where no Pages or public figures can show up. The Friends-Only feed could specifically be problematic for businesses. If users choose to frequent that, they could be free to Like Pages to show off their interests or personalize third-party apps, but not have to see their feed updates.

Overall, users simply have more choice now. If they want to see content from businesses, it’s easier to do so now than it was before. If they don’t, they can skip them. While businesses might not like the latter half of that, the update should get people browsing for longer and improve the Facebook experience overall. That means there’ll be more chances to market to users each day, and for years to come.