Today, Facebook vice president of product Chris Cox discussed Facebook’s newfound focus on design consistency, something the company calls “mobile-inspired.” Today, with its news feed and Photos redesign, you’ll notice consistency no matter what device you’re on. This hasn’t always been the case for Facebook.

The idea of “desktop only” design seems to be dead, at least at Facebook HQ in Menlo Park. It’s all about mobile. What does that mean exactly? It means a more intimate experience, more responsive to touch and clicks, and way less clutter.

“Now you can get to any page on Facebook to any other page on Facebook without going to your homepage,” said Cox. The best designers in the world say that to make people engage with a product, you have to make the “tech” disappear. That is, of course, done with beautiful and responsive design, and that’s the approach that Facebook is taking.

One example of why Facebook had to take this approach is that Cox said 35 percent of Facebook users on the web never see the chat bar on the right hand side because of their browser width, so the company was missing out on a lot of message traffic because of that. The new responsive web design will fix that. 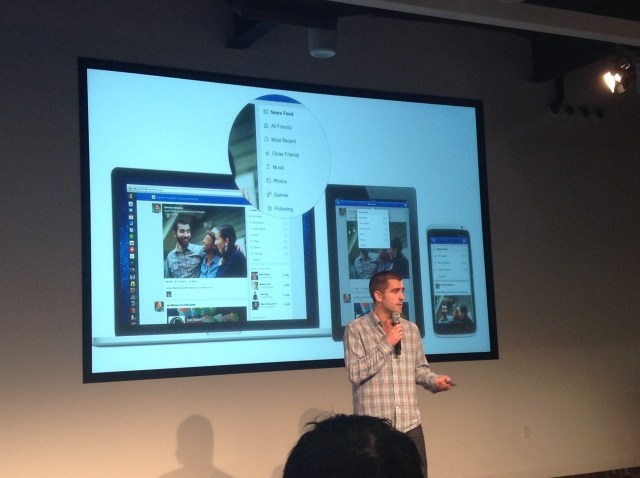 These changes will rollout on the web today and then to mobile devices in the coming months. The rollout will be very slow to make sure that the company gets incremental feedback.

The rallying cry for the day at Facebook? “Goodbye Clutter.” 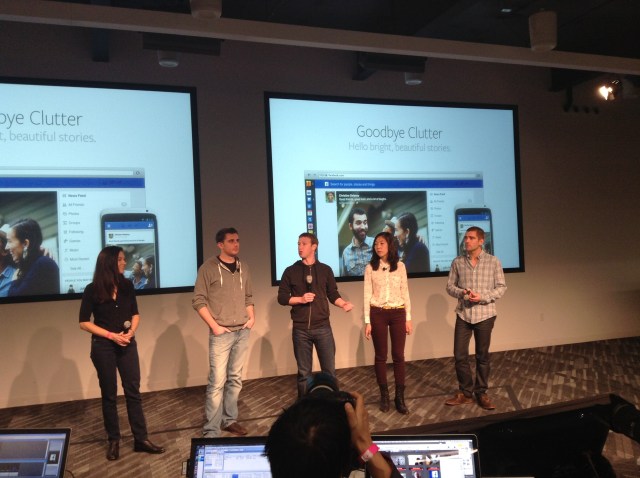 Ads weren’t discussed at all, which is where most of the clutter is. It will be interesting to see how advertisements evolve with this new design, and if we’ll see more of them. The definition of “clutter” is subjective, so we’ll see if Facebook’s definition will delight its more than 1 billion users.

Here’s a video explaining some of the reasons behind the changes:

For Businesses, Facebook’s Redesign Means Bigger Ads, A Pages Feed, But A Friends-Only Section Too