There’s always something else to browse on the redesigned Facebook unveiled today. Instead of churning through the main feed until you hit reruns and leave, Facebook hopes to keep you switching between Photos, Music, and All Friends feeds so you stick around. The design previewed at Facebook’s HQ today was actually stripped down, but I got the rollout early, so here’s what it really looks like.

Facebook said it will be slowly and cautiously rolling out the redesign so it can get feedback as it goes, but over the next few weeks users will see a banner announcing “Coming Soon: Less Clutter, More Stories” with a button to give it a try. The mobile app changes that mirror the website will be available in the next few weeks, too.

Once you’re in, the first thing you’ll notice is the big black left sidebar. It holds the standard bookmarks from before, but also lodges the Chat buddy list at the bottom, stealing it from where it used to be on the right side of the screen. Depending on your screen size and resolution, the bar will be minimized and only show bookmark icons and friends’ faces for chat instead of their titles and names too. Overall the look is slick and clean, and much less ‘late 2000s’ like the old feed.

Stories in the news feed are much bigger now. In fact, photos are almost as large as when you click through to view them by themselves. Overlaid text about who posted the photos and who Liked them frees up this extra feed space. The thumbnail images and blurbs of shared links are bigger, so you’ll know more about the website you’re about to click to.

The most important part of the new design are the content-specific feeds. Available from a chooser in the top right where Birthdays used to be, you can select to look at feeds on “All Friends,” “Photos,” “Music,” “Games,” “Following [Pages and public figures],” and any friend or interest lists you’ve created. Ads, birthdays, requests, and other right-hand sidebar stuff has been pushed downward.

Photos is quickly becoming my favorite place to go beyond the default feed. It feels like Instagram but for the web. By showing you just images and no text or links, you don’t have to consciously think as much. You just look at the pretty pictures. Music is an awesome place to discover jams from your friends. If you’ve Liked a bunch of Pages over the years but hate their updates, you can look at All Friends. And if your friends are boring you with their inane baby photos, the Following feed lets you just see the stuff shared by Pages you Like and the public figures you subscribe to.

One thing not mentioned at the press event at all are the cool new sidebar features in each of the different feeds. For example, in Photos you get highlights like “New Cover Photos” and “New Profile Pictures.” 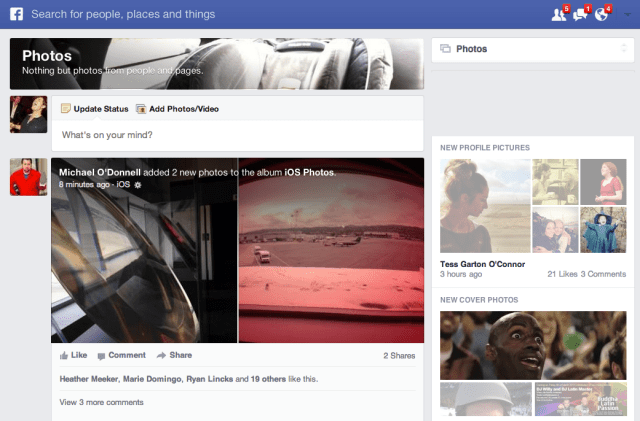 Facebook already feels more addictive to me. My typical loop on the Internet was Twitter, email, and then browsing down the Facebook news feed until I saw what I’d seen last time I visited. Now when I hit the wall, instead of bouncing I’m inclined to go discover new music, check out photos from friends, or read interesting articles from the journalists I subscribe to.

In the end, the redesign means Facebook can give us more to look at, get more time spent on the service so it can show us more ads, and better accomplish its mission of connecting the world — but in a more personalized way where the users are in control.

For Businesses, Facebook’s Redesign Means Bigger Ads, A Pages Feed, But A Friends-Only Section Too