Spotify employees in the crowd at its New York City press event are chatting about the influencer following system its about to launch, confirming my scoop from late November. Update: Founder Daniel Ek announced Spotify now has 20 million active users, 5 million paid subscribers, and has paid out a half billion dollars to artists’ record labels. Along with the music Follow feature, Spotify also launched Instant Preview which gives you a one-click way to sample an artist you see on the service, and Collection to help you organize the music you dig.

Spotify’s new Follow, Discover, and Collection tabs will come to its desktop app over the next few week, and will arrive on mobile and the new browser version of the service in a cross-platform upgrade next year. The new products address Spotify’s biggest problem — with the world’s catalogue of music at your fingertips, how do you decide what to listen to and then how do you keep track of what you discover. 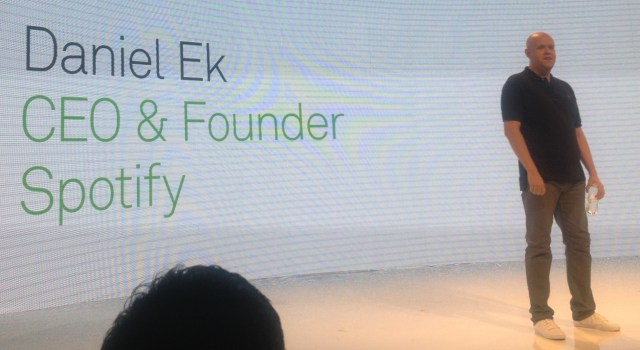 Spotify founder Daniel Ek took the stage to explain that “People can explain their whole lives through music.” He noted that over the last decade people have been pirating music, but there’s no reason the music industry can’t do better. He says the more people that join streaming services like Spotify, the more money artists will earn.

Then he gave a momentum update on Spotify’s quantifiables. It has over 1 billion playlists that he calls “the lifeblood of Spotify.” In fact, Spotify has over 4.7 million playlists called “Love”. It now has 2o million active users, 5 million paying subscribers, and 1 million paying subscribers in the United States. Spotify has paid out half a billion dollars to artists’ record labels, and that number doubled over the last nine months.

“We’re punks. Not the punks that are up to no good. The punks that are against the establishment. We want to bring music to every person on the face of the planet” said Ek. But he says the problem is that Spotify is adding 10,000 to 20,000 new songs each day, and artists have to fight for discovery with the world’s history of music. Users are asking them to help them sort through all this music.

Ek says the answer is to make discovery personal, the way it used to be when friends lent records to each other or told each other about new songs in person. Now Ek says Spotify is launching Collection “so I can save music and albums I’m interested in.” Ek explains it lets you see what you’ve been recently saving. The unplayed flag shows what you haven’t heard yet. It sounds like a version of Rdio’s Heavy Rotation section, that I think is a great way to resurface the music you’re most recently addicted to. 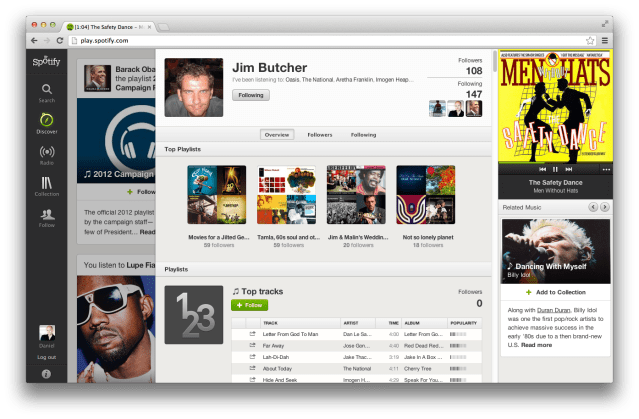 To make sure you can discover music without interrupting the song you’re currently listening to, Spotify is launching Instant Preview. Just click on any artist you see in Spotify and it will fade out what you’re currently hearing, play a sample of the new artist’s most popular music, and then restart your previous song where you left off.

Ek then announced the Music Graph and Influencer Following section of Spotify, just like I said he would in an article fromNovember. It lets you follow artists, trendsetters, and journalists, and see updates about what they’re sharing in a discovery feed. As a unique twist, you’ll see artists you listen to frequently but haven’t followed yet in the Discovery section, which Ek says gives artists “an audience from day 1”.

We’ll have to get our hands on it for a little while to see if the changes announced today actually solve the discovery that’s been holding Spotify back. Until now, Spotify had relied on Facebook for social functionality but apparently that just wasn’t cutting it. But your friends don’t always have the best taste, or listen to enough music you don’t. By building its own graph, the music graph, Spotify hopes to bring the recommendations you used to get from your favorite record store clerk into the digital age.