Lars Ulrich of Metallica has just come on stage at Spotify’s press event to tell the world his band is embracing streaming and all of its music is now available on Spotify. Lars famously raged against Napster and helped get it sued out of existence. But now he’s on stage with Napster founder Sean Parker and they seem to have worked it out.

Lars says “When [Sean Parker and I] saw each other a few months ago, we could see that we had been put as adversaries but we had much more in common and sitting down was long overdue. We were younger, maybe somewhat more ignorant to what was going on in the real world. When we sat down and had a heart to heart.”

Last week an event happened where Metallica gained control of its master recordings. With the band able to make decisions about where their music would appear, they chose Daniel Ek and Parker’s service. Lars says that’s because “Spotify has solidified itself not just as the leading music service, but, as far as I’m concerned, the only one. Spotify is a global entity and Metallica works on a global basis, too.” Spotify announced it now has 20 million total active users and 5 million paying customers. 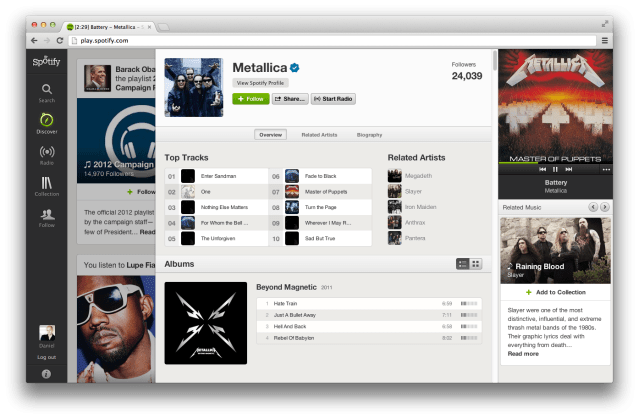 Parker says that “when the media began to mount this publicity campaign against [Napster] we were taken aback by it. We were 19-year-old kids” who wanted to make music more accessible, not specifically enable piracy. Today’s announcement proves that his dream is coming to fruition, as even the biggest opponents of file-sharing are coming on board. Still, Spotify has a long way to go to get to Napster’s peak of 100 million users. Having Metallica aboard should help, though, and might convince more big-name artists who’ve been holding out to join up, too.

Lars concluded that Spotify lets you share the music you discover with your friends, and “by doing so we know the music industry will get back to where it used to be.”

You can check out Metallica’s music on Spotify here.