TinyTap, an iPad application that lets you or your children create playable books and games using easy DIY tools, announced that it raised a $500,000 round of seed funding from Inimiti, a new $35 million Israeli micro venture capital fund. TinyTap is Inimit’s first investment. The additional funding will be used primarily for continued product development, including the launch of new game engines and a full-scale social marketplace where game creators can sell their games to other TinyTap users.

TinyTap lets you build games using your own photos, camera shots, music and more, which you can also narrate yourself. The app ships with a selection of pre-made game templates, which users – often children themselves – can customize with their own content. The user interface is meant to be very simple to use, but when it first launched, I found it could use some tweaks. Fortunately, the company has been refining the experience since, and has even introduced new features like TinyTap Artist, a built-in drawing application for creating doodles that can later be turned into games.

So far, games I created with the app have been a hit with my in-house beta tester (my nearly 3-year old daughter), who loves that I used her own picture and my voice in a basic “tap and find” type of game. 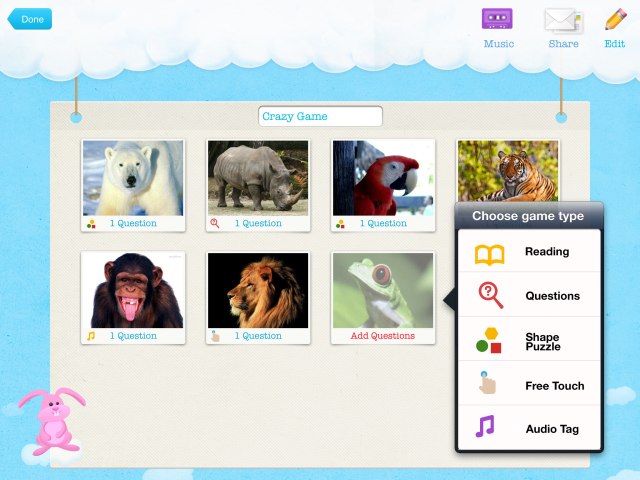 In the near future – by Q1 2013 – TinyTap will introduce three more game engines which will allow users to create even more types of games than the Q&A style games available today. These will include games where you can sync your voice to words, picture puzzles you can create with your own photos, and games where you can tap objects to hear sounds. The games engines will roll out following the launch of the TinyTap iPhone app, expected before December.

Also in the works is the TinyTap Marketplace, which will allow game creators and authors to sell their own creations to others, starting at 99 cents and up. These games are actually more like templates, since, once purchased, they can be edited to include your own pictures, voice, music, or other content. This feature should become available in one month’s time.

Originally a team of two – co-founder Yogev Shelly (formerly from Rounds.com) and Oren Elbaz (formerly an Art Director at MyHeritage) – TinyTap will be a team of five by the end of the month. The company isn’t talking user numbers or downloads yet, but Shelly says it’s “in the hundreds of thousands.” You can download TinyTap for yourself, here in iTunes.