Facebook share prices are up today, with shares at 21.91, 10.32 percent above yesterday’s level. It represents a 4.6 billion market capitalization gain. Today the company is experiencing its biggest stock-lockup expiration, with 773 million Facebook shares (NASDAQ:FB) held by employees now eligible to be sold on the open market. Notably, 504 million shares held by Mark Zuckerberg are eligible, but he declared that he wouldn’t sell them. [Update: $FB ended the day up 12.6%]

Facebook’s stock closed at 19.86 yesterday. The stock was expected to take a slight hit following this largest lockup expiration, but the market anticipated the hit with a few days of downturn. At the same time, investors are not betting anymore on yet another price drop through short selling — a way to effectively pocket money when shares go down.

Short-term profit based on a potential new share price drop is slowly disappearing as short-selling transactions deceased during October. It is good news for the company’s long-term stock price as it starts to attract committed investors. And the fact that share price is slightly up could show that the worst has passed.

Founder and CEO Mark Zuckerberg took another measure to dampen today’s lockup expiration. He announced that he wouldn’t sell his shares until at least next year. He has 444 million shares and 60 million stock options. More than a stock strategy, it is a sign of confidence in his company.

Yesterday, Facebook hired Zynga CFO David Wehner as VP of Corporate Finance & Business Planning. The company revised its forecast for next earnings as well. Both are rational reasons to drive the stock up.

Facebook’s IPO price was $38 a share when the company started trading in May. But in August, the stock fell to its lowest price at the time — $19.69 — as the initial lockup expiration of 271 million shares kicked in. Accel Partners, Meritech Capital Partners and Greylock Partners all cashed in. Andreessen Horowitz, Microsoft and Kleiner Perkins chose to stay on board.

Every lockup expiration brings a different story. On October 24, shares popped more than 22 percent in the wake of favorable earnings. But the first employee lockup expiration led to a smaller 5 percent hit, followed by a few days of downturn for Facebook shares.

After today’s milestone, the hectic days of Facebook stock price should mostly over. The company will be able to anticipate more traditional price changes.

[Update: Facebook ended the lockup expiration day with its share price up 12.6%, signaling employees are confident in the long-term prospects of the company and would rather hold their shares than sell.] 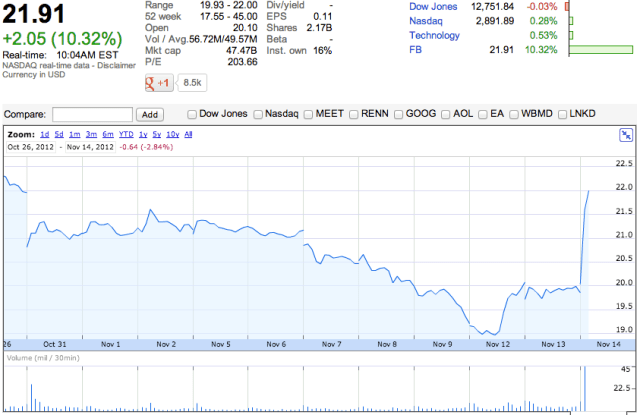