BlueStacks, the startup that’s bringing Android applications to Mac and Windows computers, is today announcing a partnership with chipmaker AMD, which will see its catalog of applications optimized for AMD-powered Windows 7 and Windows 8 PCs. With the launch of “AMD AppZone,” the BlueStacks technology has been specifically optimized for AMD GPUs and APUs, similar to how Intel’s PC app store, AppUp, has been optimized to run on Intel-powered Ultrabooks.

In addition, today’s announcement opens the door to future partnerships with PC makers that may see them preloading BlueStacks technology onto new PCs. BlueStacks says it’s now in discussions with some big-name manufacturers about pre-installations, but has nothing specific to announce on this point.

Today’s news is not entirely surprising – AMD was the lead investor in BlueStacks’ $6.4 million Series B last fall, which brought the company to a total of $15 million in outside funding. Other investors in the company include Qualcomm, Citrix, Andreessen Horowitz, and Ignition Ventures. The funding demonstrates the excitement investors see in leveraging the Windows ecosystem as a new platform to run mobile apps. While BlueStacks doesn’t discuss the terms of the deals it has with individual companies, it’s understood that some OEMs (BlueStacks has deals with Asus and ViewSonic already) may pay for the opportunity to integrate BlueStacks onto their PCs, as doing so allows the manufacturer to earn pay-per-install revenue. 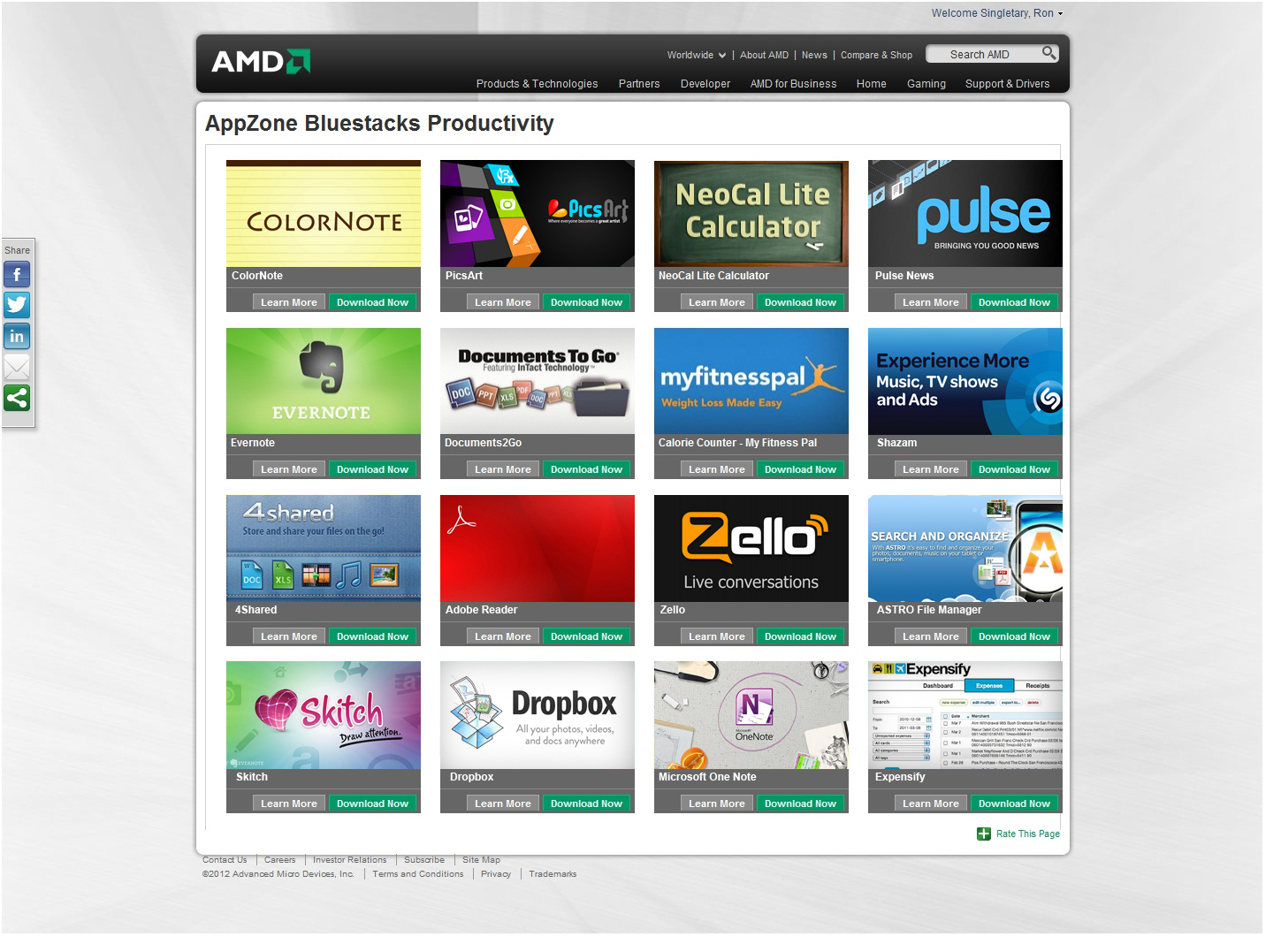 For AMD users, the newly launched AppZone store will allow them to take advantage of the specific optimizations that have been in development since AMD’s investment. The integration will be pushed to legacy Windows 7 users through an over-the-air update and will be included on new Windows 8 PCs through the AMD “Vision Center” resource, which also points to things like drivers and software for adjusting graphics card settings. Unlike the Asus deal from earlier this summer, AMD’s integration of BlueStacks isn’t white-labeled. It’s clearly branded as being BlueStacks technology.

AppZone is live now, and offers support for English, German, Korean, Chinese Simplified and Traditional, French, Italian, Spanish and Portuguese languages, and a total catalog of 500,000 Android apps. This includes apps across all categories, like shopping, games, music, business, education, and more.

For BlueStacks, the deal is primarily about expanding its reach. “This instantly makes AMD the biggest player when it comes to bringing apps to Windows 8,” said BlueStacks CEO, Rosen Sharma. “It’s not only a boon to the mobile space – adding 100 million new potential users, it’s huge for AMD’s PC-maker partners, too. You can ride a motorcycle through the margin they’re adding here,” he added. He says that margin could be anywhere from $1 to $10 per year per customer, which is “huge” for the partners.

But one could also see this news as something of an embarrassment for Microsoft, which reportedly only has 2,000 Windows 8 apps in its Windows Store at present, compared with the 500,000 apps BlueStacks brings. Still, though that may look bad for Microsoft, consumers may not know – or care – about the details. An app is an app, and their PCs will now run as many of those as their (Android) phones do.

Founded in 2009, BlueStacks software runs on computers of all sizes, including notebooks, desktops, all-in-ones, and tablets. This summer, it added support for Mac, too, but the catalog on that platform is small – only 24 apps in total at the time of writing. The company was expecting hundreds of thousands of downloads of its beta software following its release in March, but was surprised to see demand in the millions instead.