Here’s a sign that all the TV advertising dollars in the world can’t always buy you market share and consumer love (useful lesson for politicians, too): a list of top ads in the U.S. for tablets puts Samsung way into the lead among vendors — but Apple, which actually is the best-selling tablet at the moment, doesn’t even make the top-10.

The rankings, from ad analytics company Ace Metrix — a startup backed by Hummer Winblad Venture Partners, Palomar Ventures, Leapfrog Ventures, and WPP — say they determine an ad’s “Ace Score” based on viewer reaction to national TV ads in which consumers are asked to rate ads “on a scale of 1-950, which represents scoring on creative attributes such as relevance, persuasion, watchability, information, attention, etc.” Respondents, it says, are randomly selected.

The ranking seems particularly ironic in light of how tablets actually appear to be selling at the moment.

The Online Publishers Association in June gave Apple a market share of 52% collectively for the three versions of the iPad that have been released so far, with the iPad 2 at the top of the pile. Android collectively has a 47% share, with the Kindle Fire (forked Android as it is…) with a 28% share. 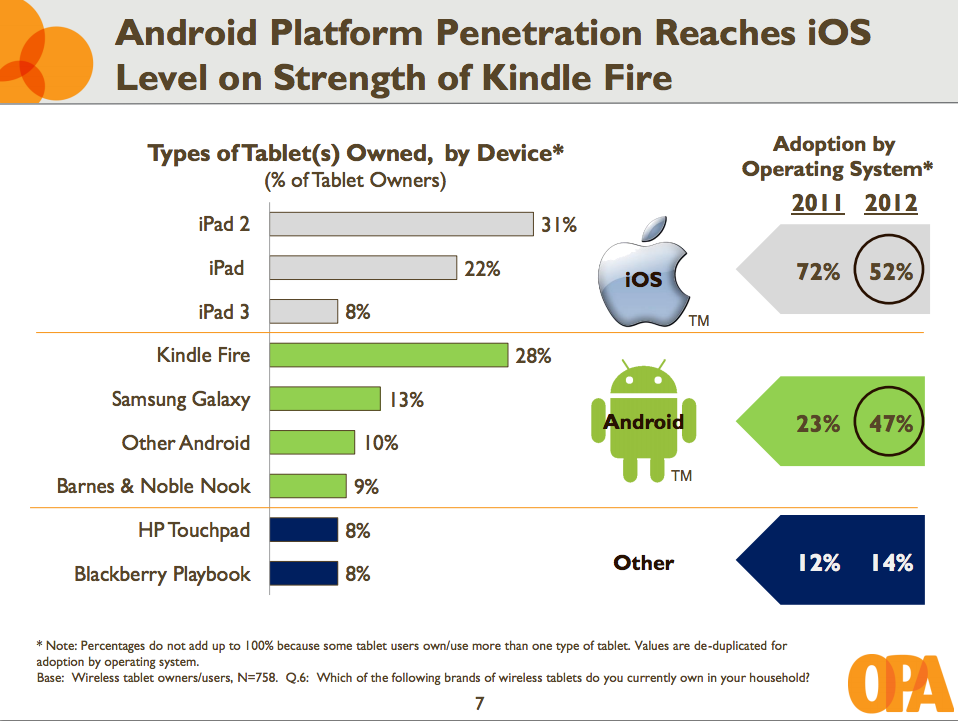 As a point of comparison, Strategy Analytics gave Apple an even bigger margin of the market for the last quarter. In July, it said that Apple accounted for over 68% of all tablets sold, with Android at under 30%. 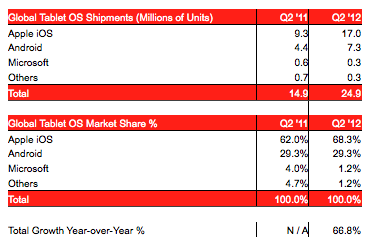 Apple is also topping the charts for top tablet brand when it comes to customer satisfaction. The latest survey from J.D. Power put it just ahead of the Kindle Fire — with the $199 price tag of Amazon’s basic tablet carrying a lot of currency among users at the moment.

The best hope for top tablet contenders, it seems, is for there to be a delayed reaction to seeing effective ads, with users taking note and remembering the impact during the holiday shopping season — the biggest buying period for consumer electronics in the U.S.

Sentiments like this one — “This ad got my attention particularly because I’ll be in the market for a new tablet around Christmastime. In a few seconds, they showed several important/ useful applications. I will be looking further at the Samsung Galaxy.” — could give a boost to Samsung in sales. Unless Apple gets its way and a sales ban gets put into effect. (That case is coming up on December 6 — and Apple has demonstrated in the past that holiday-season injunctions can be a real pain for Samsung.)

Another worry is that the top tablet maker is indeed launching another product soon, with perhaps an iPad Mini waiting in the wings for a pre-holiday launch.

Ace Metrix notes that Apple hasn’t been buying up as much advertising airtime of late — with its last ad appearing at the beginning of August. “Do It More Beautifully” has been Apple’s most effective ad so far this year, the analysts say, but its Ace Score of 627 still wasn’t high enough to make the top-10.

That ad also gave Apple its biggest “change score” of 670, but that, too, was some way behind the lowest change score in the top-10.

This points to a potential turning of the tides for Apple, says Ace Metrix. “The key to the success of these ads is the demonstration of new, exciting features that consumers have never seen before. For example, Samsung demonstrates multi-tasking, use of a stylus, etc.—all contributors to big ‘Change’ scores, a critical Ace Metrix indicator that consumers’ opinions are changing about a brand,” writes Peter Daboll, CEO.

But dont’ go thinking that being absent in ads has a clear inverse variation with a product’s success. The Nook tablet from Barnes & Noble, is also absent from the top ad rankings, with its most successful ad, from May, achieving an Ace Score of only 582. The Nook currently only has a 9% market share among U.S. tablet owners, according to the ONA.

Ace Metrix® is the new standard in television and video analytics, dedicated to delivering better, faster, and more cost-effective solutions for evaluating video advertising within competitive context. Through the Ace Metrix LIVE™ platform, companies can now access timely, actionable data wherever, whenever they need to, enabling real-time advertising campaign optimization. Combining leading edge technology and patent pending methodology, Ace Metrix is revolutionizing the way marketers measure themselves and their competitive landscape. The company is privately held and is backed by leading venture capital firms and industry leaders including.

Note: Ace Metrix®, the Ace Metrix logo design, Ace Score®, and Creative Lifecycle Management® are registered trademarks and Ace Metrix LIVE™ is a trademark of Ace Metrix. Other trademarks are property of their respective owners.