Why would Facebook quietly hide everyone’s real email addresses and only display @facebook.com addresses on our profiles? Signs, rumors, and one source point to pressure from Apple to join forces and keep Gmail addresses from being pulled in by iOS 6 Facebook contact sync.

See, Google with its social network and Android OS has become the common enemy. All three are pushing their own unified messaging systems, but Facebook and Apple’s other offerings are complementary. They saw an opportunity to quarantine Gmail addresses — the root of Google’s messaging system, and took it.

For background, Facebook added a new email visibility setting to everyone’s profile in June. By default and with little notice, it hid all your existing email addresses that you were sharing with the world and only made visible your new @facebook.com email address, which routes incoming emails to your Facebook Messages inbox. Click here for instructions on how to undo the change.

There may have been some benevolent motives behind this — keeping people from having their real email addresses scraped. It simultaneously hid user IDs that may have appeared on the profile for this reason. But the selfish-looking move quickly drew backlash and calls for a reversal, leading Facebook director of engineering Boz to post “Bad things happen when you try to prevent bad things from happening.”

But things got much worse yesterday when Facebook contact sync went live with the release of iOS 6. It only pulls in your visible email addresses, so anyone who didn’t manually reset Facebook’s change is now ending up with their @facebook.com address instead of their real email addresses in the synced contact files pulled in by their friends’ iOS devices.

That could lead people to mistakenly email a friend’s Facebook Messages inbox instead of their email inbox. This will obviously give a big leg up to the little used email component of Facebook’s unified messaging system.

So what’s the real story behind the email visibility change? I can’t 100% confirm that Apple pressured Facebook into the email visibility change, or that the two hoped to strike a blow to Gmail. But hampering Google was at the very least a nice by-product of the change or a contributing factor, if not a core cause. Let’s look at the signs pointing to Apple and Facebook being in cahoots:

The visibility change overrode privacy controls in a way Facebook has desperately tried to avoid since its big privacy change fiasco in 2009. Facebook made no formal announcement of the change, using just a small tool tip buried in the About section of profiles to notify users.

Its explanation at the time was flimsy, saying the visibility change “gives people the choice to decide which addresses they want to show on their timelines” when ample privacy controls already let users choose who to share each email address with. Now when I asked why it made the change, its explanation was uncharacteristically self-serving, saying “our goal is to further advance the messaging product we’ve built.” 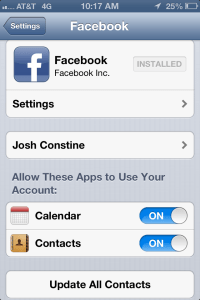 Facebook only applied the new visibility control to email addresses, not phone numbers or any other piece of contact info. When I’ve asked for more details about how the contact sync works and how the partnership with Apple was formed, it’s repeatedly stayed mum or referred me to Apple.

Most surprisingly, Facebook had little say over how the contact sync worked. It told me that, “We agreed upon the principles and Apple builds the experience. We’re trusting Apple to do the right thing with their system. We agree on the data delivered, and they’re in full control of the experience.”

All these signs point to something shady going on with the negotiations. When the change was made in June, I started digging. One person familiar with the iOS 6 integration deal hinted that Apple had pressured Facebook into the change, implying there was a specific company that wouldn’t want Gmail addresses appearing on Facebook profiles. Another source familiar with Facebook mentioned Facebook and Apple had been discussing something around the email visibility change, but didn’t know details.

Experts I asked thought pressure from Apple was plausible, especially considering the empowered position it was in during negotiations to bake Facebook into iOS 6. Judging by the boost Twitter got when it was integrated into iOS 5, Facebook may have been willing to make some serious concessions to forge an alliance with Apple. In the end it got a much deeper integration than Twitter, including full-fledged contact and calendar sync, as well as system-level single sign-on for Facebook-integrated apps.

The Enemy Of My Enemy

If the change was really altruistic, intended to give users more control and avoid being spammed, I think Facebook would have made some announcement of the change. It also may have considered reverting to the past system following the backlash. But it seemed like Facebook’s hands were tied and mouth was muzzled, a possible repercussion of being beholden to Apple. Neither of its thin explanations for the change explain why other email addresses had to be hidden.

But Apple and Facebook certainly had a lot to gain from moving people away from communicating with their friends through email, and especially Gmail. They’re all in a battle to own messaging, as well as all the social graph, natural language processing data, and advertising opportunities that come with it. 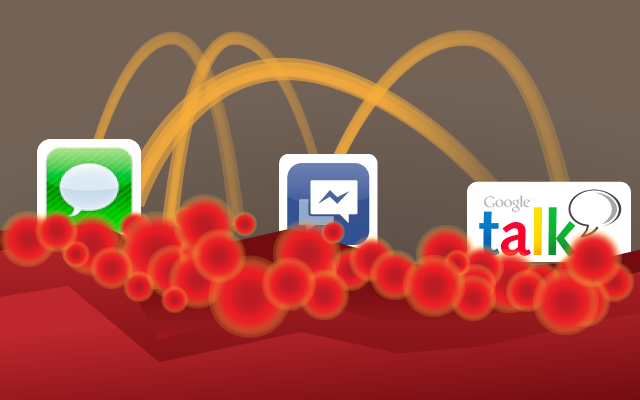 Apple has iMessage, which lets people communicate across SMS and data on their iOS mobile and OS X desktop devices. Facebook has Messages, which combines instant messaging, asynchronous messaging, and its form of email to do the same. Meanwhile, Google is gearing up to combine Gmail, Gchat (Google Talk), G+ Messenger, and Hangouts into its own unified messaging product built around Gmail addresses.

Keeping Gmail addresses off Facebook profiles and out of iOS contacts could improve the chances of success for Apple and Facebook’s messaging products and erect a barrier to Google’s.

Normally I’d say it’s all fair in love and war. This isn’t some vendetta, just business. But Facebook overrode the explicit privacy settings people had chosen for what email addresses they shared, and a huge percentage of users still don’t know it or understand how to change it back. That’s a disappointing abuse of trust, no matter what its intentions were.