At the Twitter news event today, the company revealed a number of compelling stats about its service, namely that its Apple iOS integration has boosted monthly signups by 25 percent globally.

Apple announced a deep integration with Twitter in iOS 5 earlier this year, which provided a single sign-on for Twitter use on the device, and with any app you download, it will just ask you for Twitter credentials and permission.

We know founder Jack Dorsey is extremely optimistic about the partnership and even wrote a note to third-party developers recently explaining the importance of the integration to applications.

Clearly the integration has been a big contributor to much of Twitter’s growth over the past few months. In October, CEO Dick Costolo revealed that the iOS 5 Twitter integration had already increased signups in the early days of the integration and broader release.

As you can see from the comScore chart below, Twitter.com saw a boost in traffic (to its web site, this doesn’t include mobile or other clients) in October, with 3.7 billion page views in October, up from 3.3 billion in September. While this doesn’t show the mobile traffic, clearly engagement with the site and service is up.

Twitter also announced that it has 700 employees now. And advertisers and brands seeing up to 50% engagement with Twitter’s ad products. The company will soon expand these products beyond just Twitter.com to mobile platforms as well. 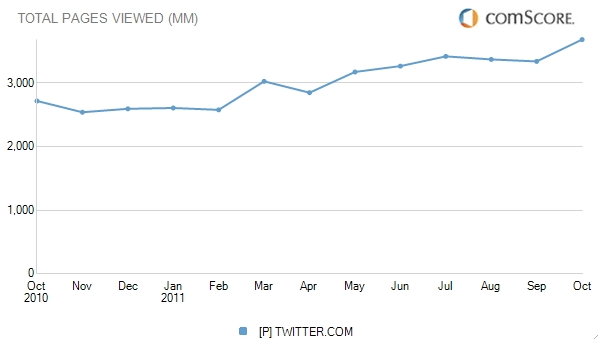