MinoMonsters, the Pokemon-inspired social game from Y Combinator’s two youngest founders, has just shipped a major new release. With MinoMonsters 2.0, the game hasn’t been so much updated, as it has been reinvented. Whereas before, gameplay involved a combination of exploring worlds and completing quests while simultaneously caring for and leveling up a wide collection of characters, the update is shifting the focus to evolving your monsters and battles.

Co-founder Josh Buckley says the changes came about after the team spent the past two months pouring over their data and figuring out what needed to be done in order to hit the major inflection points in the games. “The number one most requested feature from very early on was evolutions, much like Pokemon has,” says Buckley. “Players wanted their monsters to evolve at certain levels.” And now they do, after hitting level 30. Making this happen, however, took a lot of work on the team’s part because of the amount of animations involved, Buckley adds. 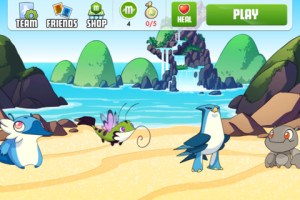 For early adopters, the biggest game change outside of the evolutions of the monsters themselves, is the gameplay. There are no more quests, no more hidden items to find, no jumping from pad to pad to explore the worlds. “We invented a much simpler way to explore the world of MinoMonsters,” Buckley says. “It’s more like an Angry Birds-style level select but it’s in the context of our world.”

Also new is a deeper emphasis on social features. Drawing upon player demand for new monsters, there will be a hidden monster on users’ homescreens that can only be opened after they share the game with five friends.

As for the Pokemon comparisons, Buckley admits there’s inspiration, but it’s not their goal to be a Pokemon clone by any means. “We’re definitely inspired by the idea of collecting and catching monsters and battling them,” he says, “but we don’t want to live in the shadow of Pokemon – we want to create a whole new brand. Living in the shadow of Pokemon would be a bad idea and we’d never be as successful as they were anyway,” he adds. “We want to use aspects of what made them magical.” He says the MinoMonsters are infused with more human-like personalities than the Pokemon characters were, as an example of how they’re different.

MinoMonsters Addiction By The Numbers

One thing that hasn’t changed is the game’s monetization aspect – players will still be able to shop for items and characters through in-app purchases, although some new items have been added. Buckley says that around 1.5% of players currently buy from the in-game store, but declined to offer revenue numbers. He was happy to talk about engagement, however. 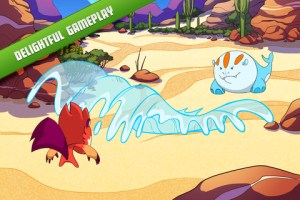 The majority of players returned to the game repeatedly, and session times were long. After first downloading, some users would play the game for well over an hour on average, and some even played for 4 to 5 hours in extreme cases. But the bulk of players would game for 20 to 30 minutes, on average, completing some 26 battles per day. While the team is happy with numbers like these, what they’re looking to do with the new version is to retain users over time, not necessarily extend session length.

Building a great, addictive game isn’t the startups’ only goal, though. The long-term vision for the company is to grow MinoMonsters to a scale where licensing deals make sense, Buckley says. Already, there has been a lot of interest. “We’ve had Hollywood producers fly out to talk about movie production…all the big licensing companies have talked to us about licensing our products,” he says, “however we’ve signed no deals on this yet because we want to reach a certain scale, so we can kind of do it on our terms.”

What’s the magic number MinoMonsters wants to hit?, we asked. “10 million downloads,” Buckley says. They’re at 600,000 downloads now since the December launch, so there’s a little ways to go yet.