Sometimes you just gotta do your own thing. Such was the case with Boris Vaisman, who dropped out of Y Combinator’s winter batch (where he was on kid-safe phone lockdown tool, Kyte). Says Vaisman, it was just a matter of “having a different vision in terms of how to move forward.” So what has Vaisman, along with co-founder Ankush Agarwal, now launched instead? Play Safe, an app for Android that lets kids safely play games on your own smartphone. 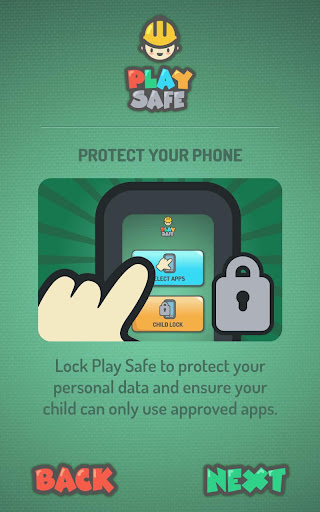 To be honest, Kyte has the arguably bigger vision. It wants to provide a kid-friendly user interface for kids’ own Android smartphones. A Net Nanny for the modern age, if you will, but one infused with family-friendly features. However, that company is a bit of ahead of today’s reality (as well it should be, this is cutting edge stuff here). Only half of the U.S.’s mobile phones are smartphones. Today’s kids are still not necessarily rockin’ an iPhone or Android. The picture is changing, though. Nielsen says that two-thirds of all handsets being sold are smartphones. There will come a time when you will buy a phone, and it will be smart.

In the meantime, a more common scenario is one where your kid (or for the childless: those grubby small people who your friends keep toting around), grabs your phone and starts to play games. Or whines for your phone until you give in and hand it over.

The problem here, explains Vaisman, is that the kids download apps, delete your own apps, or access parts of your phone that they should not be messing around with. (The horror of finding you kid in your inbox I cannot describe.) It’s a serious issue. The solution? With Play Safe, kids are given a simple, pre-approved dashboard which lists only the games and apps you’re OK with them launching. In testing, our 2-year was fine with it. She said she didn’t really know what she was doing on the Android homescreen anyway.

For now, the exit procedure from the dashboard is just hidden, not password-protected. You push and hold the Play Safe logo for 5 seconds straight to leave the app. Vaisman says that password protection will be added within a week. That will allow the app to be used with older kids, who are savvier about these things and are bound to figure out the trick.

Vaisman and Agarwal are in bootstrapping mode now, but hope to use the app (currently free and ad-free) as the starting point to build a company whose focus is on family-friendly applications. Future apps would be paid and/or monetized in other ways, but with Play Safe,  they’re looking to build credibility with parents and establish their brand.

Play Safe is live in the Google Play Store here.