“Hey, can I see your phone real quick?”

Oh, crap. What tabs did you leave open in Safari? Did you delete those photos (you know, those photos. The ones you promised her you’d delete?) That My Little Pony app that you totally-installed-just-to-test-your-download-speed-seriously-shut-up… is it still there?

Quick, hand it over before you pique their curiosity! Or say “no” and be the weirdo who wouldn’t hand their phone over to a friend for a second. If only there were some sort of on-the-fly middle ground — a “Guest Mode”, if you will.

As smartphones march toward ubiquity, so does the trend of passing them around between friends. Meanwhile, we cram (and then forget all about) more and more private junk into our phones each and every day. All the photos? All the voicemails? All the the still-logged-in social network accounts? I don’t even keep anything remotely salacious on my phone, and I’m still terrified that I’m handing over album after album of booty pictures I never even actually took anytime I pass off my phone.

Here’s the dream: one lock-screen, two PINs. One for me, one for anyone else who might use my phone but doesn’t necessarily need to see everything. 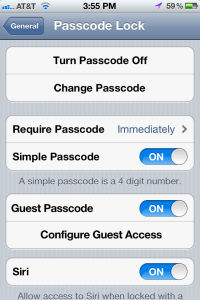 You see, I don’t mind if my friends want to challenge my ridiculous Fruit Ninja skills. They want to boot up Google Maps and be the Chewbacca (read: co-pilot) to my Millenium Falcon (read: Honda)? Great. They need to look something up and their 90’s brick phone can’t handle such techno-voodoo? Here, use mine! I trust them not to run off with my phone — they are my friends, after all.

That doesn’t mean I want them to be a tap or two away from everything.

Thus, the two PINs. Punch in your private PIN, your phone unlocks as normal. Punch in the guest PIN, it hides anything that prying eyes may sneak (or accidentally stumble) into. Your browsing history gets hidden, and all but a hand-picked, whitelisted set of apps completely disappear. Unlike a simple one-tap “Guest Mode” button, however, people you don’t want using your phone at all (like, say, dirty, dirty phone thieves) still can’t.

Things of a distantly similar vein have been built for Android — those I’ve seen, however, are all simply single-purpose apps (like games or activities for kids) that can’t be exited without a password. I’ve yet to see anything implemented system-wide. Why? Get on it, Apple. Or Google. Or Microsoft. Hell, everyone do it.

Update: Hah! Looks like I’m not the only one who wants this.