There aren’t too many people who love email these days, but few of us can actually live without it. Thankfully, there are a number of startups that are trying to make email more manageable. One of them is 410 Labs’ Shortmail, which restricts messages to 500 characters or less. If anybody tries to send a longer message to your @shortmail address, the email will bounce and your sender will be asked to write a short message. This Twitter-like model should make for briefer and more focused discussion. Shortmail just launched its updated iPhone app today, which includes an offline mode, as well as the ability to “put a message on ice” and have the app remind you to answer at a later date. The update now also lets you see which of your recipients have read your messages.

The highlight of the new app, 410 Labs co-founder Dave Troy told me earlier today, is its offline mode. Most email clients for the iPhone, says Troy, don’t handle being offline well. Instead, they usually “freak out” and throw error messages at their users. The new Shortmail app, on the other hand, simply notices that your are offline and just lets you reply to your messages in quiet. Once you are back online, it’ll quietly send your queued messages and sync up every other action you took in the app while you were on that long international flight. 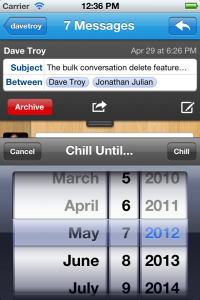 The other interesting new feature in the app is its “Let’s Chill” tool. If you are familiar with Boomerang for Gmail, you already know how this works: instead of answering a message right away, you simply tell the app to put it on ice for the time being and then put it back into your queue at a later date.

One issue with the service, of course, is that it requires you to use a new email platform and address. The Shortmail team is quite aware of this and is working on making it easier for people to use it in conjunction with their existing email provider.

Last summer, 410 Labs raised $750,000 in a Series A round with participation by 500 Startups, True Ventures, Fortify Ventures and the Maryland Venture Fund.