Google this morning is announcing a new look for its social network, Google+, which introduces a revamped navigation, with drag-and-drop elements and actions that appear when you hover over each item, as well as the introduction of new features aimed at making it easier to discover conversations to join, new profile pages, a dedicated page for Google+ Hangouts (Google+’s multi-person video chat offering), and more.

It’s interesting that Google+ has now changed its design, after its first efforts received such praise. But, after using the service for some time, it became clear that Google+’s navigational elements became a little cluttered. That “share a YouTube video” feature, for example, which popped out a box on the right side of the screen, felt tacked on. 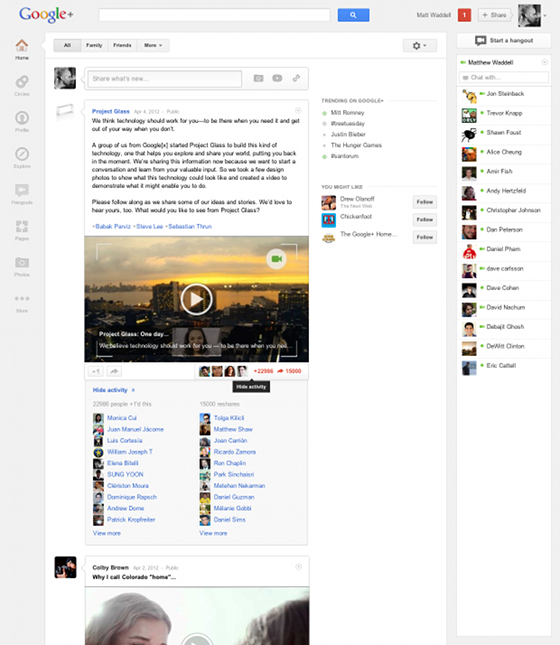 The new interface drops the static icons at the top and moves all the navigation off to the side, allowing users to reorder the icons as they wish. The list includes access to all of Google+’s features, including Hangouts, Photos, Circles, Games, your Profile page, an Explore option for browsing the site, and an icon called “More” which will hold all the icons you don’t care to see.

As you hover over each icon, related actions will appear. For example, hover over Photos for access to a big red button to “Add Photos” from either your phone or your albums.

The Explore icon is also a new addition, and takes you to a page showing the trending and popular content across the network.

Meanwhile, Google+’s version of the News Feed has been redesigned, too, and now features full bleed photos and “conversation cards,” which better separate each post and the discussion from the next by wrapping it in a box. Activity surrounding the content – like how many people “plussed” it or re-shared your post – is also now available directly beneath your shared item in a drop-down box (the “activity drawer”). 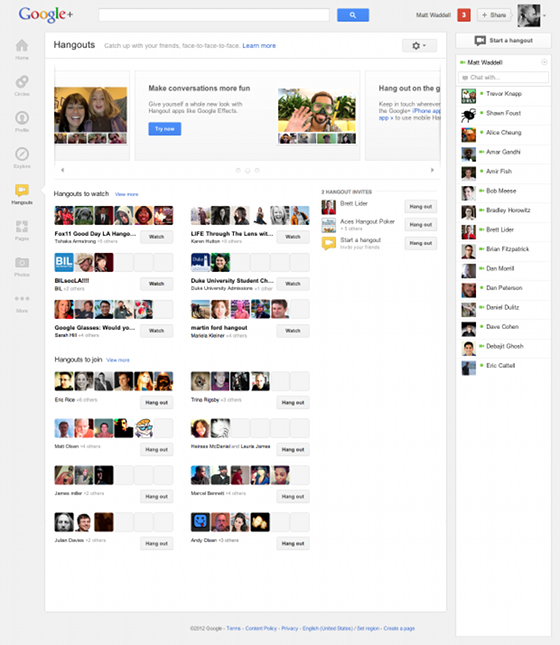 Hangouts, which have always been one of the network’s main selling points, are now being better highlighted in the refreshed site, and now have their own dedicated page, featuring a list of Hangout invitations from people in your Circles, easy access to live and public Hangouts, and a rotating billboard showing popular Hangouts, and other information.

There are other improvements, too, including a new profile page with bigger photos, and a new chat list that’s now in off in the sidebar.

In highlighting the new features, Google also mentions that Google+ now has over 170 million users. However, it’s still counting those who share via Search, Gmail, YouTube and other places across Google’s network – so, again, it’s not a real count of how many users are visiting Google+ as a destination of its own.