There’s something interesting going on over there on Fab. The design shopping site found that some of its best customers – that is, those who convert to paying customers the quickest, those who spend the most, and those who return the most often – are mobile users.

The company has known about this data for some time, but wanted more in-depth analysis, so it hired software-as-a-service firm Custora to help them dive in and figure out the lifetime value of the mobile customer, specifically those using the iPad. The results are impressive.

Since the beginning of the year, Fab says it has known that customers with mobile apps are more engaged. The company launched its mobile apps on iOS and Android in October, and by the time it reached one year post-pivot, the company found that over 40% of usage came from mobile applications. Could it be that mobile applications, with their addictive, time-sensitive notifications about Fab’s flash sales draw users in? Or is there something that’s inherently more enticing about the Fab experience when using a mobile device or tablet?

By the start of 2012, it became apparent that mobile customers behaved differently. They purchased more than two times faster, bought more often, and had larger basket sizes than online shoppers.

But Fab noticed just a few weeks ago that iPad customers’ behavior really stood out. With help from Custora, the company discovered that iPad customers convert to making their first purchase exponentially faster than non-iPad users, with over 40% making a purchase by month 3 and over 70% purchasing by month 7. 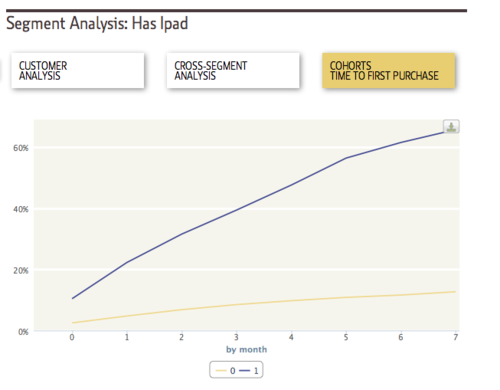 “A lot of really good businesses build their business model around getting to 10% conversion rate to purchasers within 6 to 12 months,” says Fab CEO Jason Goldberg. “It’s simply amazing that we’re seeing 10% conversion to purchase within the first week for iPad users.” 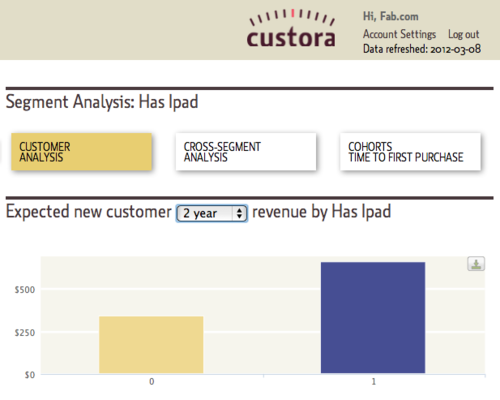 In terms of revenue, iPad users were found to be worth twice as much two-year revenue as non-iPad users. And, even though only 15% of Fab users are iPad users, those customers are expected to generate 25% of Fab’s revenue over the next two years.

That last figure is really remarkable, especially because, in the grand scheme of things, the tablet market is still in its early days. What will these figures look like three years in? Five?

And more importantly, why are iPad users such great shoppers? Is it just that they can afford to be?

As it turns out, that’s actually one of Goldberg’s explanations. iPad users have more disposable income, he notes, and are “just more likely to be design lovers.” But it’s more than just the person on the other end of the device, he says. It’s the device itself, too.

“The tactile touch experience of the iPad more closely resembles being able to physically ‘touch’ a product like physical-world shopping versus the web which can feel more distant when browsing with a mouse or track-pad,” says Goldberg.

Plus, the Fab iPad app itself has been designed to take advantage of the device’s form factor, by focusing on one product at a time, while the Fab web experience allows users to browse across sales and products. The iPad app will soon get another major improvement too – the company is developing its Retina-ready application, which it plans to have out in a few months’ time.

But all this almost makes you wonder if perhaps online shopping sites should begin taking their cues from the iPad to better improve their own experiences. Although computers don’t typically have touchscreens, there are ways that online stores could somewhat mimic the tablet experience through layout choices and navigational flows. Would users balk at a tablet-like interface on the regular ol’ web, or will they eventually come to expect it?

It’s far too soon to know the answer to that, but as far as shopping sites go, expect them – and maybe even Fab – to experiment with the concept in the months to come.