One year after the infamous Fab.com “reset” from a social network for gay men to a powerhouse design shopping site, CEO Jason Goldberg is taking a look back on the company’s progress. Staying true to the startup’s “one thing” as he calls it (design, obviously), the company has grown to more than 2.5 million members, up from 1.5 million at the end of last year. That’s 67 percent growth in the first two months of 2012, Goldberg notes.

And last month was Fab’s best yet, beating out both the holiday sales of December and the pre-holiday rush which contributed to November’s record-breaking month.

While Fab doesn’t break out exact sales figures for these time frames, the company tells us they’re now on their way toward $100 million in revenue this year, to give you an idea. 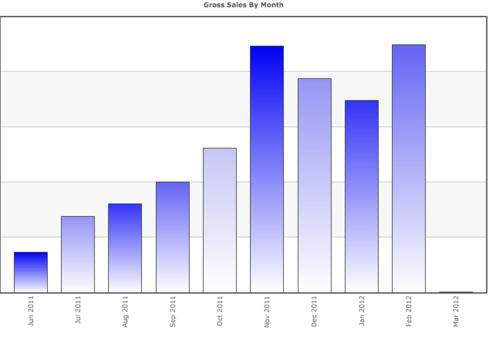 Fab is seeing some decent engagement among its users, too. 25,000 customers have made five or more purchases on the site, and repeat customers account for two-thirds of the company’s business.

Facebook referrals are helping to drive some of that business – Fab says that its social shopping integrations now account for 15 percent of its daily traffic, and Facebook visits have doubled since December.

But perhaps more important than social, is mobile. Today, more than 40 percent of Fab’s usage comes from its mobile apps, launched in October. And here’s something else: mobile shoppers purchase more often and with bigger basket sizes than Fab’s web shoppers do. Why is that? Maybe because Fab’s mobile applications are always on hand, and notify you when those addictive, time-sensitive flash sales are about to start? The notifications draw you into the app with a sense of urgency that feels (at least in this shopper’s opinion), more enticing than when browsing Fab on the desktop.

Then there’s the latest feature to hit Fab.com: the weekly shops, which went live in January before arriving on mobile in February. These shops allow customers to browse storefronts which are organized around product categories, as opposed to by designers. Already, the shops’ impact is being felt, as they contributed more than 10 percent of Fab’s sales in February.

For the company, this sales growth has led to growth of the Fab team itself. This time last year, Fab had four full-time employees in New York. Today, it has over 200 people working in N.Y., Berlin, Pune and Deinze.

Fab.com’s reset, is one of those success stories other startups hope to learn from. So what’s the secret? That goes back to that “one thing” Goldberg referred to.

The team scrapped its 150K-member social network so it could focus on the intersection of these three things: what they were most passionate about, what they believed they could realistically be the best in the world at, and what they were certain they could develop into a big business in a market ripe for destruction. At the end of the day (or rather, the night…and the wine), they realized their “one thing” is design.

It sounds like such a simple formula, but finding that thing – and then executing well on it – is something that’s easier said than done.

As for what’s next for Fab? Golberg says the company has “Amazon-scale plans”:

“We’re building a business for the decades,” he says. “This is just one year into working on it and nine months into operating it.”