While the 7-inch Toshiba Thrive is much more comfortable in the hand than its 10-inch counterpart, many of the best features in big brother never migrated over to the 7-incher. That said, this still may be the slate for you if gaming and web-surfing take precedence over e-reading. Otherwise, I’d point you to the Amazon Kindle Fire. 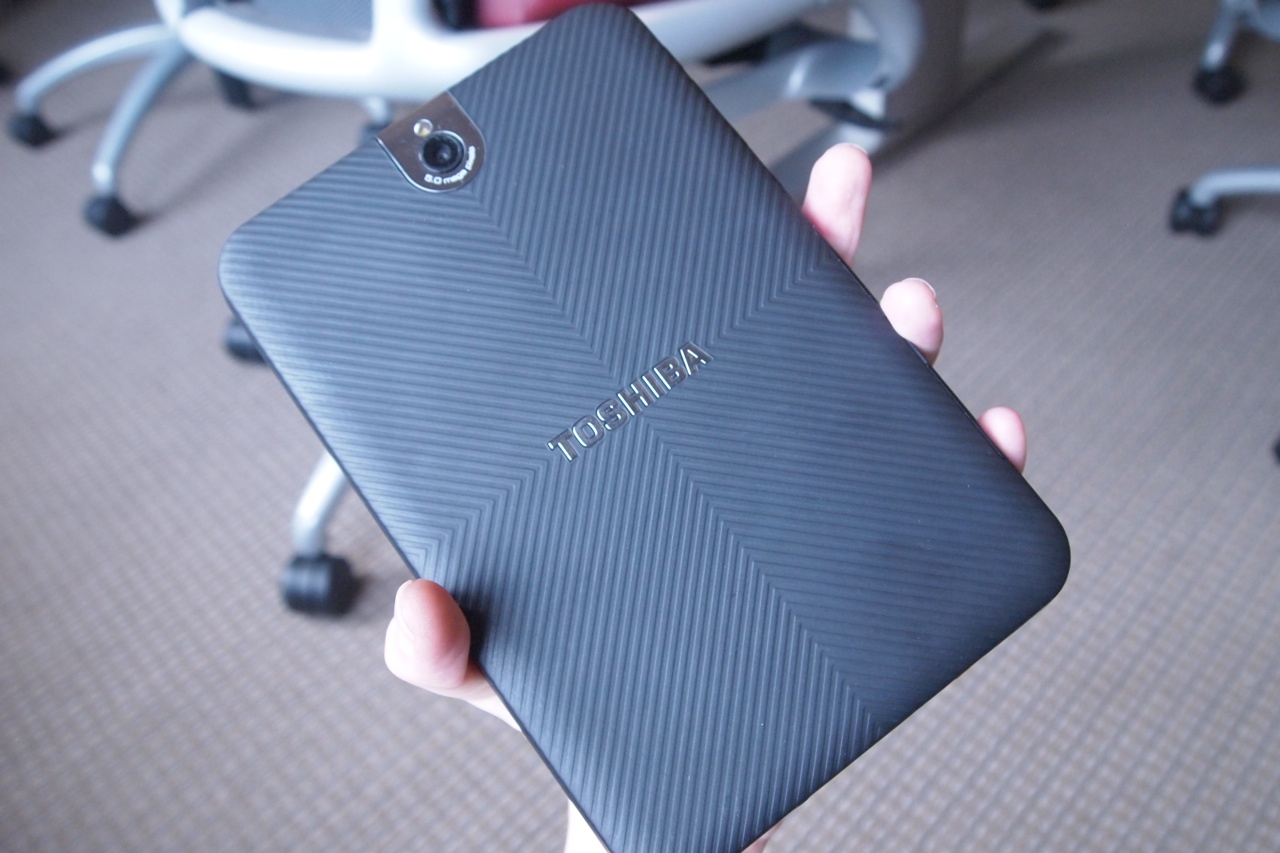 Despite less connectivity than big brother, I actually enjoy the 7-inch Thrive much more in the hand. It’s rather thin compared to the 10-inch model, with rounded corners and slightly angled edges. The charging port is placed squarely on the bottom of the slate, which makes it annoying to play around with in landscape while charging.

A 3.5mm headphone jack sits up top, with a power button, volume rocker and auto-rotate lock all along the top left side. Below that you’ll find a plastic cover protecting a microUSB, miniHDMI, and microSD card slot. If you can dig back into the corners of your memory, you’ll recognize that the 10-inch Thrive came will full-sized USB and HDMI and SD card ports.

The 10-incher also had a removable back cover and interchangeable battery, which isn’t the case on the Thrive 7″. The same rubberized, textured finish along the back panel is still present, though, and makes the tablet even more manageable. I actually let this thing sit on one leg for most of the time I used it, and it automatically gripped my pants so that it never slipped once. (Look, Mom! No hands!)

When stressed, the Thrive 7″ crackles and pops quite a bit. But I didn’t find anything so suspect that would lead me to believe this isn’t a solid build.

I’d say the Thrive’s best feature would be its display. A 1280×800 pixel resolution on a 7-inch display is pretty beautiful, and Toshiba has of course layered its Adaptive Display and Resolution+ technologies on there, as well. The display doesn’t take prints as much as some other slates I’ve dabbled with (talking to you, Sony Tablet S), but of course, there’s no such thing as an entirely print-free display.

As far as input goes, the display is super responsive. It was able to follow my finger in scrolling, even while I flicked it back and forth as fast as possible. Most Android tabs have a bit of a lag on that front, but the Thrive 7″ kept up with my pace.

The Toshiba Thrive family is special in that it runs pure Android 3.2 Honeycomb. No annoying overlays. No unfamiliar UIs. Just Honeycomb, the way you know how to use it. Toshiba did include its media player, along with a handful of other pre-loaded apps like Netflix, NFS Shift, File Manager, and Quickoffice HD, but on the whole this is a very vanilla experience.

Of course, access to Google’s apps such as Google Maps, Google Talk, and the Android Market is included. 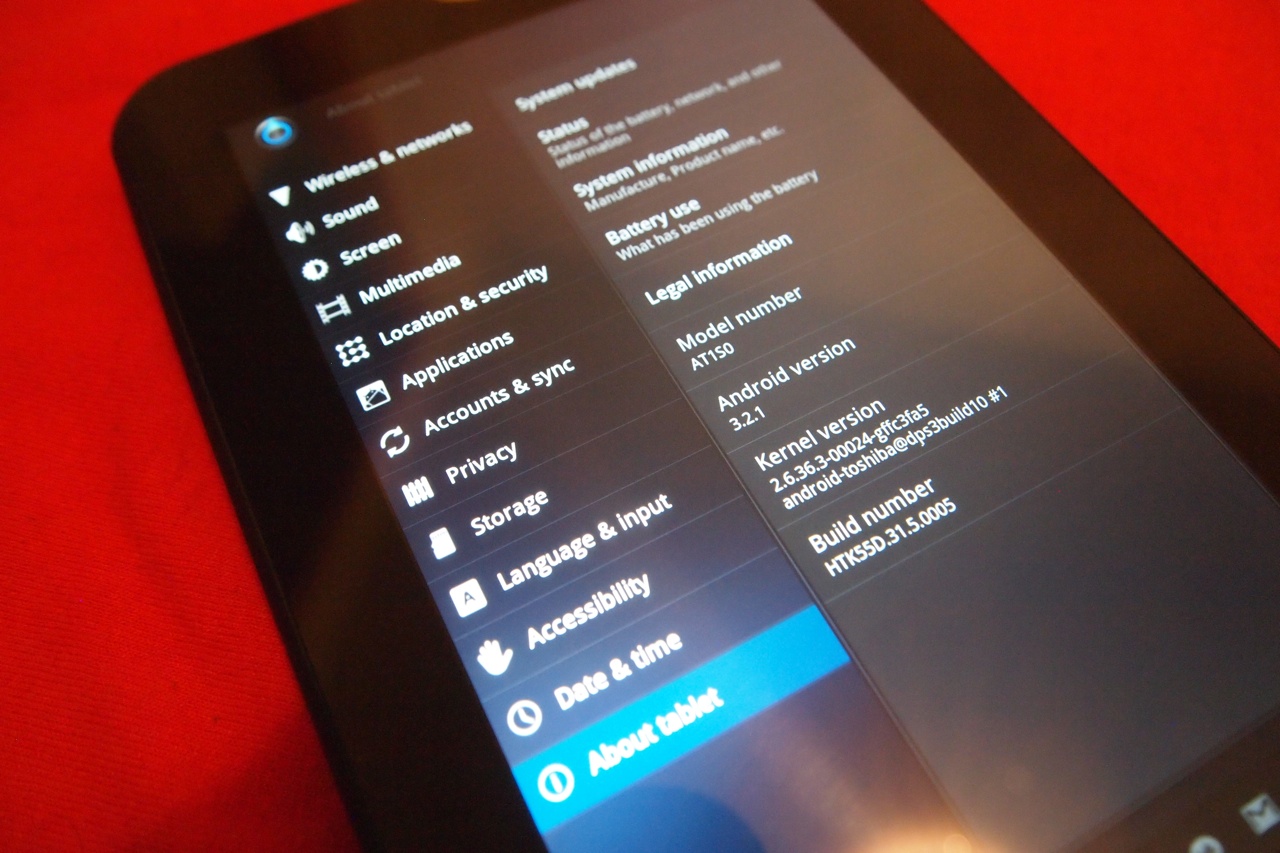 I did have a little trouble with the Thrive’s 5-megapixel rear-facing camera. The shutter is frustratingly slow, though I was surprised to find that in camcorder mode the camera actually adjusts well between low-light and well-lit settings.

I tried to do all my work on the Thrive one day (which in retrospect was a bad choice on a 7-inch tablet), from 8am to 6pm. It made it to around 3pm before giving out, which includes the usual breaks for bathroom, food, and an occasional mission on Grand Theft Auto III for iPhone.

The good news is that it charges quickly. I was able to go from dead to 85 percent power in less than half an hour.

When it comes down to it, the 7-inch Thrive is a solid, albeit hefty, little Android tablet. Even without the full-sized ports, there’s still quite a bit of connectivity there and we saw perfectly acceptable performance the whole time. However, the price tag puts this little guy in a tough spot.

For just a couple hundred more, you can nab yourself an iPad, and anyone shopping for something a little lower on the pricing totem pole has plenty of options. Most notably, the Galaxy Tab 7.0 Plus is just $249 from T-Mobile, though that requires a two-year agreement.

Of course, we do have the Kindle Fire and Nook Tablet, which certainly can’t compete with the Thrive in terms of performance or capabilities. Then again, that won’t matter to the novice user.