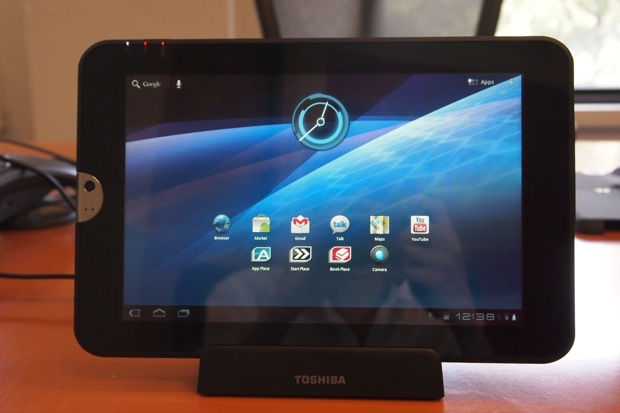 Today the highly anticipated Toshiba Tablet got a formal introduction into the market, and finally, a name: the Thrive. Rather than trying to put out the “thinnest” or “lightest” tablet on the market, Toshiba’s Thrive is all about usability, according to the manufacturer. Sporting a 10.1-inch display, the Thrive will ship with standard Android 3.1 Honeycomb.

In terms of specs, that 10-inch LED backlit display boasts a resolution of 1280×800 pixels, and comes with Toshiba’s Adaptive Display and Resolution+ video enhancement technologies, which make standard definition video playback a much more enjoyable and crisp experience. Under the hood, the Toshiba Thrive touts an Nvidia Tegra 2 dual-core 1GHz processor, with 1 GB of RAM.

As far as hardware is concerned, this tablet definitely differentiates itself from an ever-growing pack of other fledgling Android slates. This is the first tablet I’ve seen that has a removable back cover, so you can carry around a secondary battery for long stays away from an outlet. The back cover is also customizable, in that it comes in a number of different colors such as pink, lavender, green, navy, and standard silver and black.

Another differentiator for the Thrive is its host of various ports, including a full-size USB 2.0, HDMI and a full-sized SD card slot, so users with the 8GB model can boost storage with a 32 GB SD card. The USB, HDMI, and mini-USB ports are all hidden beneath a rubber cover. The Thrive sports a 5-megapixel rear camera and a 2-megapixel front-facing camera for video chat. Along with Toshiba’s video enhancement technology, the Toshiba Thrive also ships with audio enhancement technology. I played around with the settings a bit during my hands-on and definitely noticed a BIG difference between the standard sound coming from the device’s dual stereo speakers and the audio playback with Toshiba’s audio enhancement technology. 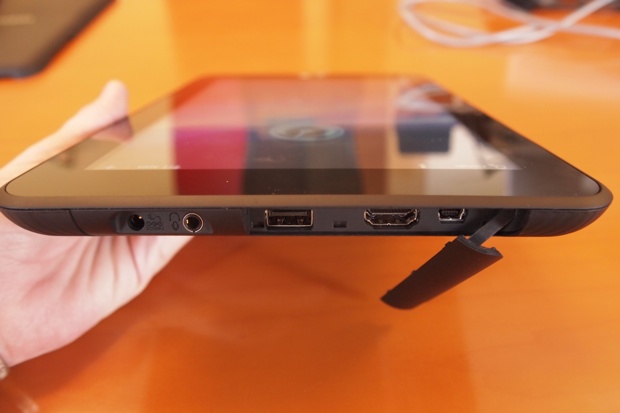 Along with the standard Android pre-loaded apps, the Toshiba Thrive will ship with Toshiba File Manager (great for moving files around between devices), PrinterShare, and Need For Speed: Shift. Plus, Toshiba decided to throw its own Media Player into the mix, but don’t worry, the Gallery app is still present and accounted for. Unfortunately, the Toshiba Thrive is a Wi-Fi only tablet, at the moment, but Toshiba certainly didn’t cringe at the thought of getting carriers involved in the future.

As far as availability goes, the Toshiba Thrive, and a number of different Thrive accessories, will be available for pre-order on June 13, with full retail availability beginning in “mid-June.” Participating retailers include Amazon.com, Best Buy, Office Depot, OfficeMax, RadioShack and hhgregg.