Depending on who you talk to, the fact that you need a light to read e-paper-based e-readers like the Kindle is either a strength or a weakness. It’s become part of the branding, after all: “just like real paper!”

But with increasing competition from LCD-based devices, it might be that E-Ink and its many clients will need to level the playing field. How about a softly-glowing screen? 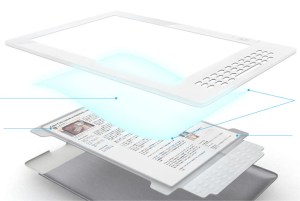 The eBook Reader points out a newish technology being pitched as the next step in passive displays. Flex Lighting makes an extremely thin layer (0.05mm thick) that allows light from hidden LEDs to be distributed evenly over its whole surface. The light is directed towards the screen itself, it seems, which is certainly necessary for a reflective-type display. It only needs one or two LEDs, so battery draw is minimal, and the extreme thinness and flexibility make it work in practically any display stack.

The technology has existed for ages, but they claim their new method is both thinner and superior to existing implementations. I’ll believe it when I see it, personally: this sounds pretty sweet, but how it performs in real life is all that matters. Will it be too dim? Too bright? Will people even want it? Is it expensive? Hopefully these guys will have a booth at CES and we can drop by and check out their technology in person.