Wibbitz, a new service that functions as sort of a “play button” for the Web, has just raised a seed round of approximately half a million. The service is similar to former TechCrunch Disrupt winner Qwiki, in that it, too, automatically generates videos on the fly using the content found on a given website.

But unlike Qwiki, Wibbitz is positioned as a tool designed specifically for publishers who want to provide an easy-to-digest video summary of an article or articles’ content.

Disclosure: Roi Cathy, who has written for TechCrunch over the past 5 years, is an investor in Wibbitz via Initial Capital, where he’s a Managing Partner.

The technology itself is easy to implement: just a single line of JavaScript code is all that’s needed to create the video summary.

Once implemented, Wibbitz takes an article’s text and automatically creates a summary, adding in images from either the website’s own image library, or a public image bank containing images licensed as Creative Commons (i.e., those designated OK for re-use).

The end product is an easily digestible video containing text, images and audio narration, which is surprisingly listenable. Here’s an example. And below, a screenshot. 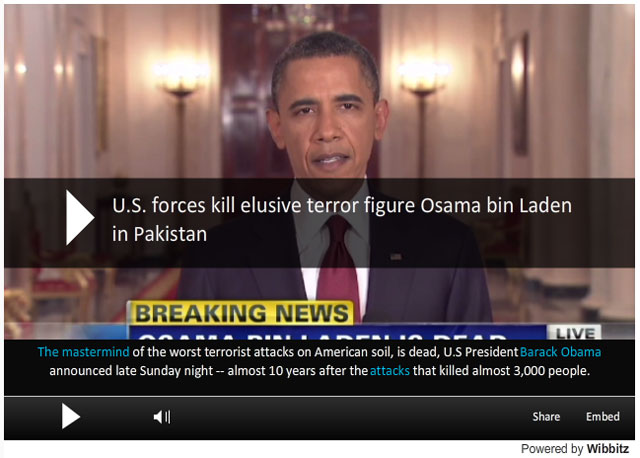 The video can be shared to Facebook, posted as a link on Twitter, or embedded elsewhere, depending on the publisher’s preferences. It also includes both a Flash and mobile-friendly HTML5 interface, and presents the appropriate version depending on the browser and platform detected.

Wibbitz already has 1,600 sites which have been testing a more basic form of the service while in private beta.  Starting today, the company will be begin accepting registrations from those who want to try it the newer player on their own Web site or blog.

The product will offer freemium pricing, with larger publishers paying by usage. Publishers will also be able to further monetize their content by way of short pre-roll ads, if desired.

While Qwiki’s technology is certainly impressive, Wibbitz’ attempt to address the real-world problem of information overload through video summaries serves as a more practical implementation of the technology’s potential. Think of it like this: Qwiki is a way to consume information about a general topic (e.g. a Wikipedia page), while Wibbitz is a way to consume a single article.

That said, either company could easily expand into the other’s domain at any time. In addition, whether or not the mainstream Internet-surfing audience will go for this idea is still unproven. Qwiki has a great, engaging service and iPad app, but is it a daily “must?” Not really.

Wibbitz, based in Tel Aviv, was founded by Zohar Dayan and Yotam Cohen. Dayan tells us that their technology was already in development before they ever saw Qwiki’s launch at TechCrunch Disrupt in November 2010.

Seed round investors include Lool Ventures, Initial Capital and Kima Ventures. The exact funding amount was not disclosed.