In the late 1980s, Apple created a few concept videos about a device they called the Computer Knowledge Navigator. These videos came up recently when Apple unveiled the iPad, because the machine in the videos is a tablet computer. But that’s about all the iPad has in common with this conceptual device. Instead, a new startup launching at TechCrunch Disrupt today, Qwiki, is much more like the futuristic computer in the videos.

To be clear, Qwiki isn’t a piece of hardware. Instead, it’s a piece of software meant to run on the web and as an app on mobile devices. What it does is present to you data about millions of topics in an extremely interesting and visual way. Imagine if someone created a movie highlight reel of Wikipedia pages — that’s sort of what Qwiki is like. You search for something — a topic, a person, etc — and Qwiki talks to you, telling you all you need to know about what you searched for, while also showing you key things about the subject or person.

You can also click on sub-topics or related topics to access more Qwikis with vast amounts of other information. It’s a fairly incredible way to consume information. And the data isn’t just from Wikipedia. Say you do a search for a person, Qwiki can look at their social connections and tell you about their LinkedIn profile, for example. It is very, very impressive.

Qwiki was created by Doug Imbruce and Louis Monier. The latter you may know as the founder of one of the original web search engines, AltaVista. He’s also worked at eBay and Google, which he left to join the search startup Cuil as the VP of Product. Obviously, that product didn’t work out so well, but Monier left only one month after it launched. And now he’s full into this visual approach to search and discovery. 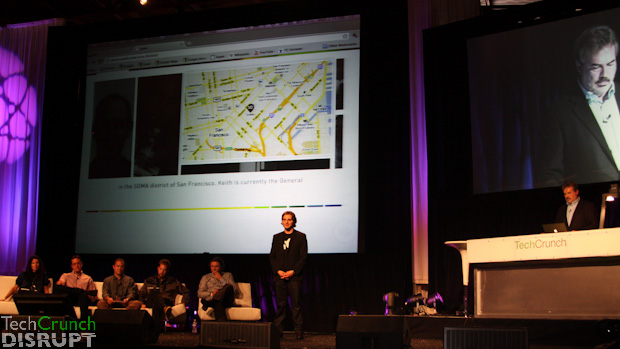 GB: What’s the usecase? In terms of the front end of this, I would focus on the front end and the use case, I need this tomorrow.

TM: The potential for international audiences is exciting.

JC: Every person you’ve shown this to has come up with a new use case.

JL: Is the wiki part of the name signifigant?

Qwiki: We’re think that every user could have their own Qwik, so yes.

CS: I see the future of this is in self-affirmation. “You can do anything.”

Qwiki: The opportunies are unlimited. This is a very important technology.