Yesterday, we reported that Twitter was close to acquiring AdGrok, the Y Combinator-backed keyword bidding platform. Today, the company has confirmed the move with a blog post, “@AdGrok Is Going To @JoinTheFlock“. But as we noted in an update to our post yesterday, things are a little bit more complicated than they appear. You see, one of AdGrok’s founders and its CEO, Antonio Garcia-Martinez, is not joining Twitter and has instead taken a job at rival Facebook.

Both Garcia-Martinez’s Facebook and LinkedIn confirm that he has accepted a role as a product manager at Facebook this month (though we’re hearing he may have accepted the position in April). There, he’ll be working on the Facebook Ads team. In other words, yes, he’ll be competing (at least in some regard) with his former colleagues.

We’re hearing this split hasn’t exactly left both sides all warm and cuddly. The two other AdGrok founders, Matthew McEachen and Argyris Zymnis, will be joining Twitter. We’ve reached out to Twitter about the oddity and will update if we hear back. Garcia-Martinez posted our link yesterday to his own Facebook wall and when someone asked him what the deal was, he responded with “It’s complicated”. Well played.

As for the rest of the AdGrok team, the post notes:

When Twitter approached us and asked if we’d be interested in working on their monetization platform, we realized that this was a once-in-a-lifetime opportunity that we just couldn’t pass up. The fact that the Twitter team is both smart and user-focused only made our decision easier.

Meanwhile, AdGrok, the product, is shutting down. They will no longer be accepting new customers and will cease charging existing customers immediately. All services will be shut down June 30. Data can continue to be accessed through Google AdWords and Analytics.

Update: I just spoke with Garcia-Martinez. “We did the deal that maximized value for all concerned,” he said. And he was sure to note that all the founders are still on good terms. 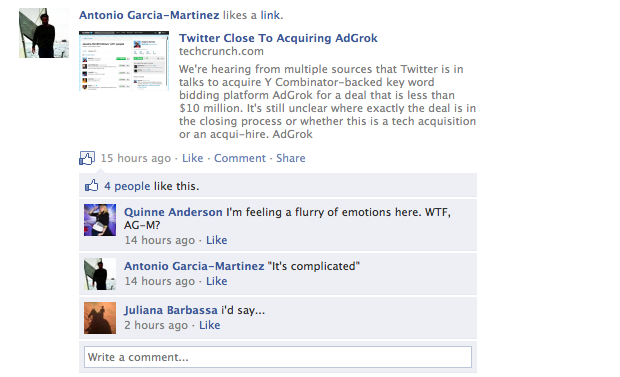