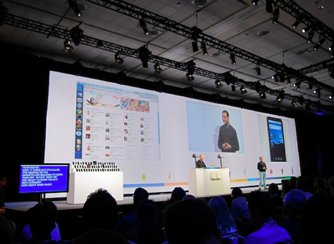 Flashback: Moscone Center, San Francisco. Google’s Vic Gundotra is pacing the stage, rolling off one new awesome Android feature after another. There’s Fro Yo, the new version of Android that does laps (literally) around iOS. And then for a real a-ha moment: a sneak peek at Google Music, a service that would let you purchase songs from your desktop and ‘push’ them to your phone wirelessly, among other things. It was billed as a preview and no firm date was given, but nobody guessed we’d be waiting for a full year. But there were delays, deals didn’t get worked out, and Google was beaten to the punch by Amazon’s Cloud Drive, which launched in March.

This evening the WSJ reported that after a year of (failed) discussions with the labels Google will finally be launching a music service tomorrow at Google I/O — and it’s very similar to Amazon’s, which also doesn’t have approval from the labels. I spoke with Google’s Jamie Rosenberg, head of digital content and strategy for Android, who confirmed the news. And while he says that Google will improve on Amazon’s offering in many ways, one month from now I’m guessing it will look significantly less impressive.

As with Amazon Cloud Drive, Google’s music service will work by uploading your music library to servers, then streaming that music to whatever PC or Android device you’d like, giving you instant access to your library whenever you have an Internet connection. Uploads will be handled by a small downloadable client available for both PC and Mac. There will be a Flash-based web player (which will work with ChromeOS), and the music service is baked into the Music application on Android versions 2.2 and higher, which can also store songs locally. It’s invite only for now — Google I/O attendees will get an invite, as will users with the Verizon version of the Xoom. Google isn’t talking pricing, but the initial test will store up to 20,000 songs for free (Rosenberg says the limit is based on number of songs, not gigabytes).

It sounds good on paper, but there are a few hurdles. The biggest is the upload process: after signing up and installing the native app, you’ll be prompted to start uploading your music library. Nobody likes having to upload gigabytes of content. It may not be difficult — Google’s client will actually upload the songs you’re most likely to listen to first to minimize the pain — but there’s still the mental hurdle of letting the upload run for a full day or two.

And, unlike Amazon, you won’t actually be able to purchase any music through Google’s service. This will not be a huge deal (if you leave Google’s desktop client running in the background it will automatically upload any new songs to the cloud) but it’s still frustrating.

I think Android users will be happy to start using the service that launches tomorrow. It will be good, and significantly better than Amazon’s Cloud Drive because of the native Android integration and some tweaks to the user experience (the phone will intelligently cache songs it thinks you’ll listen to, for example). But Apple is rumored to be announcing its competing cloud service at WWDC in June, likely with full cooperation from the labels — which could make all the difference.

Instead of having to upload your thousands of MP3s, iTunes may be able to simply check your (much smaller) database file and recreate it online using a central repository of music (in other words, no huge uploads). The technology wouldn’t be new — Lala, which Apple acquired in 2009, was doing that years ago. It’s just a matter of hammering out the deals with the labels. And really, I can’t imagine Apple launching a service that tells its users to sit back and wait a couple of days. Instead, you’ll fire up the new version of iTunes, check a box saying you want your iPhone and iPad to have access to all of your content, and bam — users won’t have to learn what an online locker is, their stuff will just be where they want it.

Will this have a negative impact on Android sales? No — aside from third-party apps like DoubleTwist, Android has never offered an easy way to manage your music, so this is a step up. But for anyone who is on the fence choosing between the two operating systems, it’s another win in the iOS column.

For what it’s worth, Rosenberg says that Google looks forward to launching additional functionality in Google Music. But the centralized database of content that would enable near-instant library uploads is something that the labels need to sign off on. And something tells me they aren’t going to be very pleased with tomorrow’s launch.