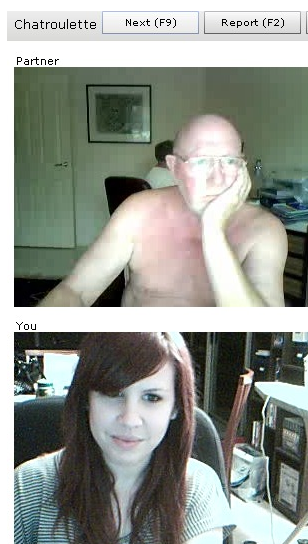 Chatroulette is plotting another comeback!

The Russian website that allows complete strangers to jump from one awkward random video chat to the next was all the rage among the Web’s tastemakers in the first half of last year, but it seems like everyone’s now pretty much moved on. The fact that the site was – and is still – frequently used by creeps who couldn’t seem to keep their pants on didn’t help much in that regard.

Anyway, Chatroulette is still around, and despite the existence of sites like YouTube, VEVO and direct competitors such as Tinychat, they claim to be the ‘largest video social network’ in the world, attracting more than 20 million visitors per month.

Chatroulette plans to announce later today that, in the past six months, it has been doing everything it can to remove all ‘inappropriate content’ from the website. The company says it has developed “both electronic and human methods” to clear the site of sneaky masturbators and whatnot, using optical recognition techniques and 32 full-time reviewing agents, which I like to refer to as cock capturing systems and full-time genital gawkers instead.

All this should make Chatroulette a clean, safe but still anonymous video chat experience. I’ve heard repeatedly from companies like venture-backed companies like Tinychat and live video streaming providers like Ustream and Justin.tv that achieving this is both expensive and difficult, which makes me curious about Chatroulette’s ability to avoid penis sightings.

Fact is they’ve boasted about banning genitals from the site before, only to be caught with their pants down time and time again.

Sites like Pick or Skip and Supyo are trying to get this right, too, by the way.

In other news, Chatroulette, which had been given a – peculiar – new look at the beginning of this year, has teamed up with 99Designs to launch a contest to design both a fresh logo for the service and a revamped website.

Winners will be awarded a $1,000 each, for both the winning logo and web design.

Finally, Chatroulette tells me they’re pursuing aggressive growth and have a pipeline filled with new projects, which will be announced in the coming months.

Time will tell whether Chatroulette was really just a fad, or if they’re in it for the long run.

On a far too insidery sidenote: we had a lot of fun coming up with a good headline about this. We hope you like our choice, but feel free to come up with better alternatives in the comments below.