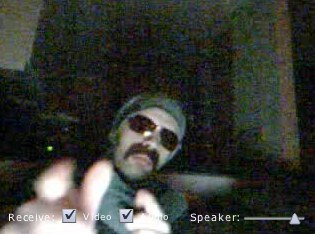 SFWeekly Web Editor Alexia Tsotsis (not pictured left) spent some time early this morning trying out Chatroulette, a website that connects random strangers for a video chat. The results are unlikely to surprise you. Unless you are new to this whole Internet thing. Screen shots of some of her more entertaining chats are below the post.

Harkening back to the days of A/S/L, the random vidchat service Chatroulette is one of those online arenas where not being a white male looking to get off puts you in a definite minority. Founded by a 17 year-old Russian high school student named Andrew Ternovskiy, the service is a more successful Omegle, combining elements of the MTV show “Next” with vidchat capabilities.

Aspiring chatees click to play and as an escape latch you or your partner can hit “Next” anytime if you get bored, scared, or have to get back to work. The “Report video as inappropriate” button also seems to provide some comfort, but by judging by the nsfw fare served to me last night, doesn’t provide much of a threat.

I pressed “play” last night at around 3:00 am PST and after about 45 clicks on “Next” encountered 5 straight up penis shots, a lot of “camera disabled” chats, two women who automatically clicked “Next” once they figured out that I too was a female, and a lot of very grateful looking guys, including a Chinese “fan of Google” and a French guy in indoor sunglasses, who asked me whether “I was a more dominate lady or submissive woman” in the hope that I would be the former.

Out of the 10,920 of my fellow Chatroulette participants, my “Roulettees” were a good cross section of Internet humanity. And while I did not encounter the “suicide” hanging videos alluded to in many of the chats, things like “did you hear the one about the guy who shot himself in the bath tub,” were brought up in conversation quite a few times, as examples of just how crazy Chatroulette can get.

Anywhere you get a mass of people communicating uncensored (and yes much like 4chan.org, China has not yet blocked Chatroulette) will be subject to typical groupthink behavior like urban myths and requests for interaction better left to the casual encounters section of Craigslist. Nonetheless, the service’s potential for more substantial acts of communication is formidable.

Chatroulette is what you’d expect it to be, micro-interactive reality TV with a large heaping of cybersex. While most people are (whether they admit it or not) voyeurs – the fact that Chatroulette lets both participants see each other limits the site’s potential user base to the weirdos – and despite piquing VC Fred Wilson’s interest it doesn’t seem like there’s currently enough weirdos to turn the humble startup into something mainstream.

One “Roulettee,” when asked what he thought the service was most useful for, responded, “connecting with people around the world.” Yeah, and asking them to show you their boobs. 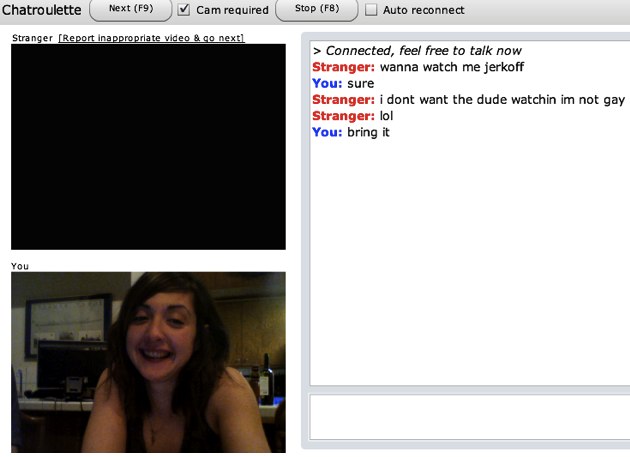