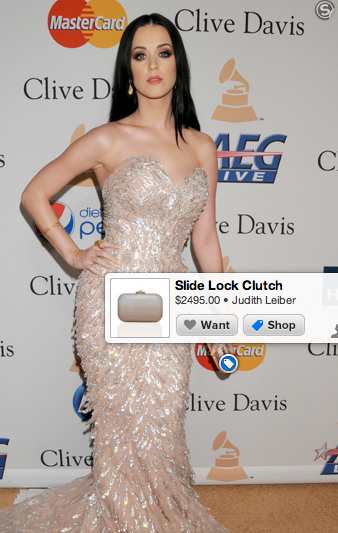 When we first covered Stipple in September of last year, it seemed like a really cool idea: tag people in images no matter where they reside on the web — not just on Flickr or Facebook. It was quickly clear that investors like Kleiner Perkins, Mike Maples, and even Justin Timberlake agreed, as they poured $2 million into the company just three months post-launch. And now that Stipple is ready to reveal the full product they’ve built, it’s pretty clear why the initial investment came so quickly. This platform has the potential to be massive, and to make a lot of people a lot of money.

So what is Stipple now? Well, there’s still the people-tagging element for sure. And that’s still really cool. If you tag a person in a photo on the web, you can enter their Twitter name or Facebook name and then anyone can see their most recent updates as overlays on that picture. But the much bigger idea is that Stipple is teaming up with photo services, fashion brands, publishers, and others to possibly alter the way people browse and buy things on the web.

Think of it this way: right now when someone is browsing the web and they see a shirt they like on a random photo, they probably resort to doing a Google search for something similar. Or maybe they open the website of their favorite store to see if they have anything to match that look. But what Stipple offers is a way for each photo to show you exactly what piece of clothing the person in the photo is wearing — to show you who makes it, how much it costs, etc. And it allows you to “Want” it (save it to look at later) or “Shop” for it via two overlay buttons right on the picture itself.

It’s an idea that clearly resonates with web browsers. How do I know? Because Stipple co-founder and CEO Rey Flemings had some data to share with us. Stipple has actually been serving these product dots (the overlay used to show an area of the picture contains more information) for a while now — enough for over 10 million data points. He says that people mouse over a photo with a dot 46 percent of the time. And those users touch the product dot 12.48 percent of the time — that’s actually more than people use the people dot (4.9 percent of the time).

Stipple is able to get them because they’re tying real products that people are actually wearing/using in images to the pictures themselves. And the fact that they’re doing a lot of this tagging on photos with celebrities in them helps a lot as well. And that’s one part of the key. 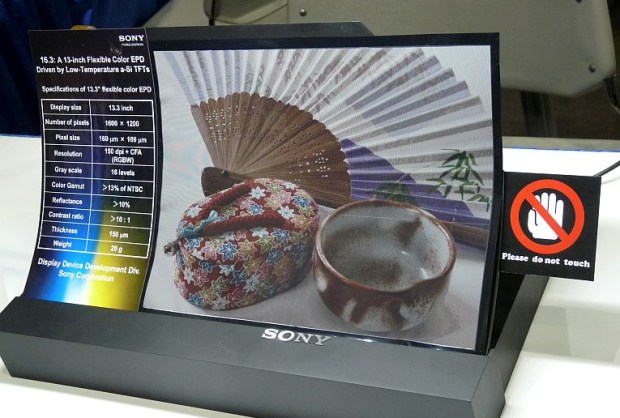 What Stipple is launching today with version 2.0, is a full product suite to make it easy for photo agencies, brands, and publishers to easily implement and/or work with Stipple to get everyone paid in this new clicking (and hopefully buying) frenzy. The product names are Lens (for photo rights holders), Pipeline (for brands), Network (for publishers), and Want (for consumers).

Photo agencies that are out there taking tens of thousands of pictures would use Lens to tag their pictures with their appropriate licenses and credits. Stipple has 9 of these photo agencies currently signed up.

Brands that are trying to sell goods directly to customers woud use Pipeline to label their goods appropriately. Stipple then scales this labeling across all similar photos (such as multiple photos of a celebrity at an event wearing a certain piece of clothing). Stipple currently has 60 brands signed up.

Publishers would use Network to put the images with all of the data on their sites. The best part is that it’s not actually metadata that is used to make this all work, it’s photo tagging done on Stipple’s end and delivered to a site via a simple line of JavaScript. This means that images copied from elsewhere (and even resized, cropped, etc) will still work. Over 1,600 publishers are currently signed up.

The key to all of this is to make the tools simple and fast to use. And Flemings believes they’ve nailed this now.

At the same time, there’s some competition in the space. The big one that people may know is Pixazza, the so-called “AdSense for images”. The fact that their $12 million series B was participated in by Google Ventures certainly helped with that moniker as well. There’s also Thinglink (CrunchBase profile). But Flemings believes that Stipple has a very clear advantage over services like Pixazza and even Google’s own image searching technology thanks to their tools and true product matching.

He showed me how search with a competitor may show a piece of clothing similar to what a person in a photo was wearing, but it wasn’t the exactly item. “Users don’t like ‘get this look’ — they want to know the exact brand,” Flemings notes. Stipple is focusing on the exact items.

And when the celebrity photos from the partnering photo agencies start rolling in, this real item matching is going to be especially key. Imagine being able to know what things celebrities on the red carpet are actually wearing and being able to buy it with one click. One could imagine celebrities wanting to get in on this action as well to help brands sell items — for massive fees, naturally.

Update: Here’s a link so you can see what the tech looks like live. 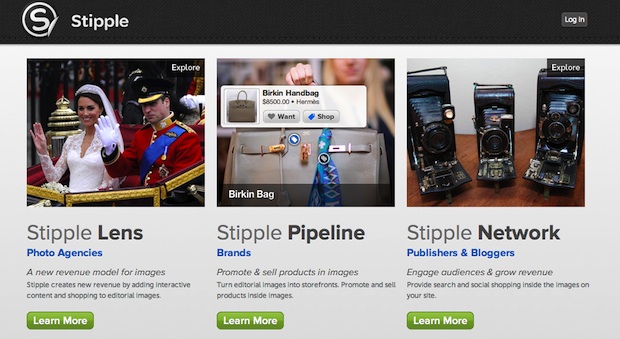