Pixazza, a Google Ventures-backed photo tagging service that has been compared to an “AdSense for Images,” has raised $12 million in Series B funding led by Shasta Ventures, with Series A investors August Capital, CMEA Capital and Google Ventures also participating in the round. This brings the startup’s total funding to nearly $20 million.

Pixazza allows publishers to identify, tag and match products found within online images on their sites and then link them back to the inventories of Pixazza’s network of advertisers. The service, which can be integrated in a site by adding a single line of code, allows consumers to browse the photos featured on a site and mouse over it to reveal information and pricing about similar products, and if desired, click to purchase.

The startup has a vast database of products to include images and tags related to the entertainment, fashion, travel, home and sports industries. Pixazza’s tagging technology is also compelling; the startup crowdsources workers to list products and tag them with the appropriate link to a retailer. Additionally, Pixazza shares advertising and affiliate revenues with publishers.

The company’s co-founder and CTO James Everingham thought of the idea for Pixazza after his wife was trying to find a pair of designer shoes that were worn in the movie “Sex In The City.” Upon realizing the astounding price of the shoes, Everingham’s wife ended up buying a similar-looking shoe in a store for half the cost. Everingham says that he felt that the experience of finding similar items you see in photos could be a valuable business.

The company has also announced that it reaches more than 25 million unique visitors per month through its 75-plus publishers, which include US Weekly and Access Hollywood. Of these visitors, more than 70% are based in the U.S. Additionally, Pixazza says that the startup delivers commerce-enabled photos at a rate of 8 billion image views per year, a 60% increase in the last three months. 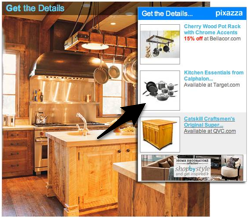 Pixazza plans to use its new fund fuel product growth and expand to international markets. Already Pixazza has been launching new products in the past year to help make its technology more interactive. For example, Pixazza just launched Shopdot, a service for creating branded, hosted storefronts for publisher websites. And today, the company has announced the availability of a new self-serve publishing tool that allows anyone to turn static images into more interactive ones.

Previously, Pixazza was working on a client basis with its service. But today, the self-service platform, which is still in private beta, helps make Pixazza even more like an ‘AdSense for Images.’ Publishers can identify, tag and match products within the body of online images and immediately link them to Pixazza advertisers’ product inventories. Pixazza’s platform will aggregate datafeeds from merchants into a catalog of more than ten million apparel, home, electronic, sports, travel and automotive products. Pixazza also provides full text search to find similar products to those in the images on publishers’ sites.

There’s no doubt that interactive advertising technologies like Pixazza are catching on and even attracting the attention of search and advertising giant Google. Everingham declined to name exact numbers but says that click through rates are significantly higher than regular banner ads.

Everingham says that Pixazza is only at the beginning of what could be a very successful and profitable experience. “There’s currently three trillion images on the internet,” he sad. “We want to turn every one into an interactive experience.”