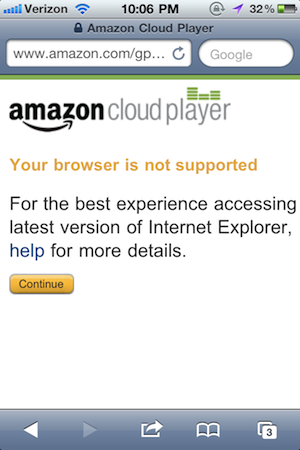 As you may have read by now, earlier tonight, Amazon dropped a bomb on their rivals in the online music space: a fully working cloud storage and playback system. And it’s not just working on desktop web browsers, it works on Android devices too. One important place it doesn’t work though: iPhones, iPads, iPod touches — no iOS devices.

At first, you might think this is a Flash issue (Apple’s devices famously do not support Flash). But it’s not. I don’t have Flash installed on my MacBook Air and the Cloud Player works fine (as it does when you disable Flash in Chrome). Flash is needed to upload files to Cloud Drive, but not for playback. So that’s not the issue.

Instead, it appears that Amazon may simply be blocking the mobile version of Safari from playing back songs through Cloud Player. When you attempt to load the player, you get a warning that the browser isn’t supported. But you can continue anyway and everything seems like it may be fine. But when you click “Play” nothing happens.

On Android devices, Cloud Player works by way of the Amazon MP3 app. This app does not exist on the iOS platform because it would compete with Apple’s iTunes Store. Presumably, Amazon could make another stand-alone app for Cloud Player or include it in one of their other Amazon iOS apps, but Apple new platform rules on subscriptions make this a bit murky (Amazon’s Cloud Drive is free for 5 GB but costs a yearly fee for more storage).

Of course, even if Amazon wanted to bring Cloud Player to iOS devices, Apple may not want it there. The company is gearing up to launch their own music locker system, though perhaps not until the fall. Google is also working on a similar service.

Update: As Gian points out in the comments below, there is a way to play songs on an iOS device from Amazon’s service: you hit the option to download them. This essentially downloads the MP3 file from Amazon’s server and uses Safari’s built-in player to play it. Not exactly ideal, but it does work — with AirPlay too! 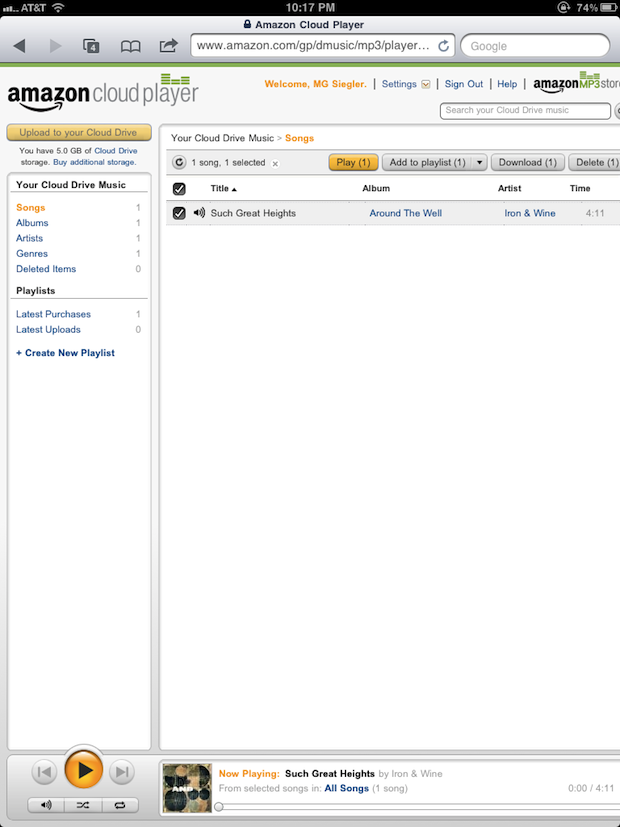