Wow, when I wrote last night that Kevin Rose doesn’t really use Digg anymore, I had no idea how perfect the timing was. It turns out Rose really has tuned out. Because, say multiple sources, he’s already resigned from the company and is closing a $1+ million financing round for a new startup he’s founded.

Rose first launched Digg in December 2004. The service was an instant hit, and for a long while just all the big players thought about acquiring the company. Things never got so close as they did in mid-2008, when Google took Digg all the way to the altar before walking away at the last minute. Digg would have been sold for some $200 million. Every employee knew about the deal because Google had interviewed them all individually. Credit to then-CEO Jay Adelson for getting everyone back on track after the deal fell apart.

But those were the glory days for Digg. The site faded as newer services like Twitter and Facebook became ubiquitous. Rose and Adelson had a falling out, Rose stopped coming by the office much for months, and one of them had to go. It was Adelson. Rose took over as CEO until they hired Matt Williams last Fall.

Rose stayed on in vague executive role after Williams took over, but it’s been clear that Digg isn’t really top of mind for him anymore. He’s not using it much, as I showed last night. And he is very active with Revision3 and other projects.

So what’s the new startup? We’re still trying to figure that out, as well as who he’s hired and who’s invested. We’ll update as we hear more. Rose, for his part, isn’t responding to my emails, which isn’t surprising.

Update: Rose has tweeted that he’ll “continue advising Digg / on the board of directors, & taping Diggnation (as i have been since [Willaims] joined).” 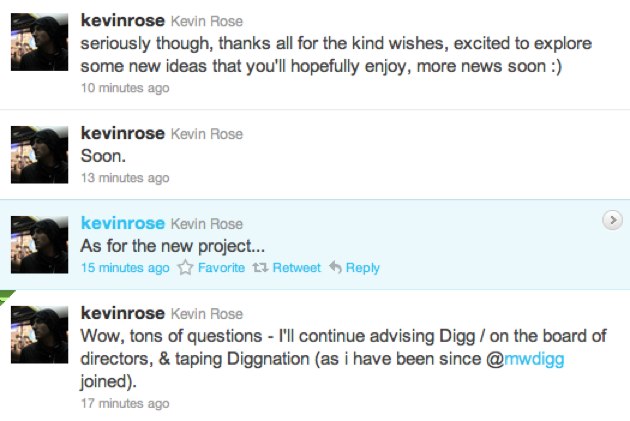