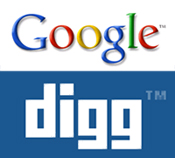 Google’s on and off negotiations with Digg have been back on in a big way for the last six weeks, we’ve heard from multiple sources inside and outside of Google. The two companies have reportedly signed a letter of intent and are close to a deal that will bring Digg under the Google News property. The acquisition price is in the $200 million range, says one source.

We first wrote about the Google-Digg negotiations in March. Despite a vigorous denial by Digg CEO Jay Adelson the negotiations continued, although Google’s Marissa Mayer reportedly cooled on the company for a period of time.

The companies are now in final negotiations according to our sources, although it could be a couple of weeks before it closes. And while the major deal points have been agreed on, the acquisition could still fall apart. Microsoft, which was previously interested in the company, may be willing to step back in at a much lower price.

Most of Digg’s revenue comes from a three year ad deal with Microsoft, which will be terminated on a sale to Google. Digg has raised $11.3 million in venture capital.