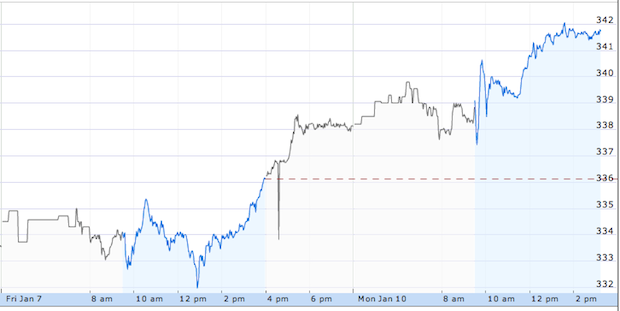 I’m on a plane right now flying out to New York City. Why? Look at the chart above. That’s pretty perfect visualization of what the entire world now expects tomorrow: the Verizon iPhone.

Apple’s stock has surged over 5 points today. And it’s up nearly 10 points since the whispers for began on Friday that Tuesday would be the big unveiling. This surge shouldn’t be surprising since at the minimum, the Verizon iPhone is expected to add a few more billion dollars to Apple’s bottom line.

It was only a week ago when Apple’s market cap passed $300 billion for the first time. Now it’s already over $313 billion. Since Friday alone (again, when the talk of the device really began), Apple has added just about $10 billion to their market cap. That’s one powerful device.

The results for the other players involved in the ordeal are less clear though. Verizon’s stock (below) had skyrocketed late on Friday, but it has since settled back down. 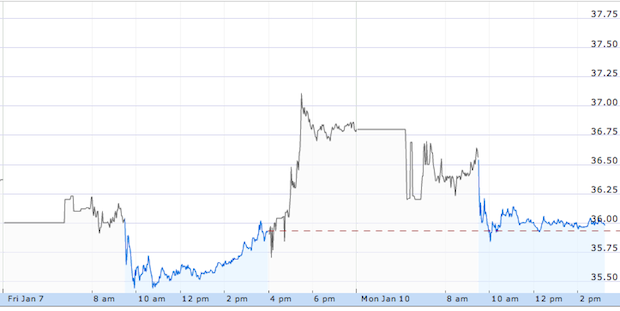 AT&T (below), which will lose exclusivity of the device but will still be selling the iPhone, has dropped quite a bit (percentage wise) since Friday. And today was especially bleak for the company, though they’re rallying a bit right now.

Meanwhile, Google (below), the company behind the rival Android smartphone software, has been plunging and rallying since Friday. It too now is just about at where it began Friday.

So the results are in: the big winner of the Verizon iPhone just pre-launch is Apple. Surprise, surprise.

Update: When I first published I had the other AT&T chart. I swapped it with the correct one.