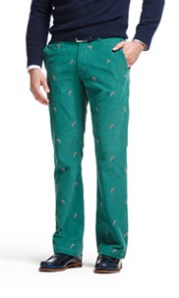 Andy Dunn is part Indian and part European. He’s tall and slender, but he has surprisingly meaty thighs. As a result, he could never find pants that fit well. European cut pants were too tight but when he tried to wear American cut pants he felt like he was swimming in billowing fabric. And if he spent all day shopping to find great pants, he didn’t feel great afterwards. “If I spent a Saturday shopping, I felt like I misspent my time as a man,” he says.

So while at Stanford Business School he and Brian Spaly started Bonobos- a company that makes pants that fit. The theory was that there’d been huge strides with fit in premium denim but not regular pants. There were three big issues that Spaly tackled with the original design: The lack of a contoured waistline, a rise that is too big or too small and the tailoring in the thigh. Most off-the-rack pants are designed to fit the broadest number of men, and so they wind up fitting few men well– especially the hip, semi-athletic, 25-to-40 year old guy.

Spaly was the main designer, adding to the fit some crazy colors, high end fabrics, and hip details in the buttons and zippers. They started getting them made in San Francisco’s small garment district near the ballpark, while a lot of his peers were starting Facebook and iPhone apps.

In his first year they sold hundreds of thousands of dollars in pants, mostly to classmates out of the trunks of their cars. There was another sign of success: Girls in bars starting grabbing Dunn’s butt for the first time. As a single guy in his early 20s, that was an important data point. (Spaly is no longer at the company.)

Dunn decided to up his game and build a direct-to-consumer Web brand called Bonobos— a hybrid of the Gap and Zappos. Only problem: No one would fund him. This was before the new ecommerce boom and Bonobos was really more of a fashion company than a tech company. VCs were confused. So he raised three rounds of angel money from some rich customers who didn’t want to live life without his pants– a whopping $7.7 million in all. With no marketing team, he sold about $1.3 million in pants in November– more than 3,300 pairs on Cyber Monday alone.

Now, he’s raised $18.5 million from Accel Partners and Lightspeed Venture Partners to up his game again. A big part of that will go into customer acquisition. The way to build a Web brand no one has heard of isn’t SEM and SEO, Dunn argues. That’s about fulfilling a demand that’s already there. He needs to generate demand, to make people want his pants. And he’s doing that through good, old-fashioned offline media, brand advertising and PR.

Bonobos is also creating a mid-market line with the tentative brand name “Iowa’s Revenge,” because it’s headed up by a team of Iowans and it’s aimed to be a solid, not-terminally-hipster brand with Middle America appeal. Like discount retailers H&M or the early days of Old Navy, the cuts and design will be as innovative, but the fabrics won’t be quite as high end. A pair of Bonobos pants will cost $100; these will cost more like $60-$80. He’s also expanding into dress shirts and suits.

Suddenly in a once-again-sexy ecommerce world– particularly one where men’s fashion is exploding– Bonobos is a hot commodity. His investors are a good fit (GET IT! I’m sorry.) Accel has been all over this wave of companies funding Etsy, Groupon and ModCloth. Lightspeed’s Jeremy Liew has similarly been hot on modern ecommerce, funding LivingSocial and ShoeDazzle. A lot of VCs Dunn met with showed up wearing his pants, but typically the khaki chinos. Liew showed up wearing the turquoise corduroys, and Dunn was impressed. “This guy knows the space and obviously cares deeply about this product,” he thought. (We’ve noted Liew’s fashion sense here. Go here to steal his Holiday 20% off code.)

Interestingly, when we had Liew on Ask a VC a few weeks ago, we talked about whether you always had to have a technical co-founder, and he said sometimes it made sense to outsource the early technical development of a company. He didn’t cite Bonobos then, but he must have been thinking about it. With this funding, the company will bring its technology in house, actually hiring a team of engineers for the first time. Bonobos expects the company to become more tech-centric over time– hopefully getting into the business of taking measurements, doing 3-d mapping and making custom clothes. That’s a more crowded space, but few of the entrants are getting big traction.

Meanwhile, his manufacturing is getting farther away from the headquarters, with about 80% of his pants now being made in Asia. He hired a VP of sourcing from the Gap who has tiered production out to the regions with the best fabric and manufacturing for that fabric. China does the washed chinos, India does the corduroys, Malaysia does the dress shirts, South America does the polo shirts. If he ever jumped into the crowded denim market that inspired the company, he’d make them in LA, where there’s some of the worlds best washed denim. “Denim and dyed knits. Those are the only two things America can do anymore,” he says.

The catch with Bonobos is a higher-than-average cost of customer acquisition, because it’s not leveraging an existing brand. But at $100 a pair and no middleman retailer, Dunn is hopeful that the cost will turn out to be a bargain over the lifetime of a young hipster suddenly getting his butt grabbed by girls in bars for the first time.