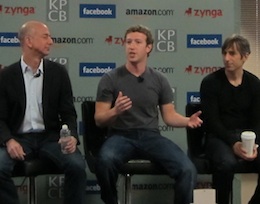 Of them, it was Pincus who probably had the most interesting thing to say. “In five years, everybody will always be connected to each other, instead of the web,” he noted. He said that he often thinks of today’s social companies as “dial tones”. That is, they’re merely entry points for these social connections.

He noted that Facebook is the big overall dial tone for this social experience. But also singled out others as sub-dial tones, Pandora, for example, is the music dial tone, he said. He also said he hopes that his company, Zynga, will be the gaming dial tone.

He expressed excitement in the fact that while right now, many of these companies are still working on building out the infrastructure for this social experience, in five years, all this plumbing, as it were, will be in place. Then the real fun can begin.

The others on stage echoed this sentiment, suggesting that today is about laying the groundwork for something much greater to come. Zuckerberg noted the importance of Facebook’s Platform and the partnerships they have to make with companies who are doing great social things that they can’t or won’t do. Bezos talked about Amazon’s Web Services, and how vital they already are to many of these services. And he said that things are growing, quickly.

Obviously, this $250 million sFund speaks to the laying of a foundation for something greater.

More: John Doerr Talks sFund And iFund But Not fbFund Or aFund