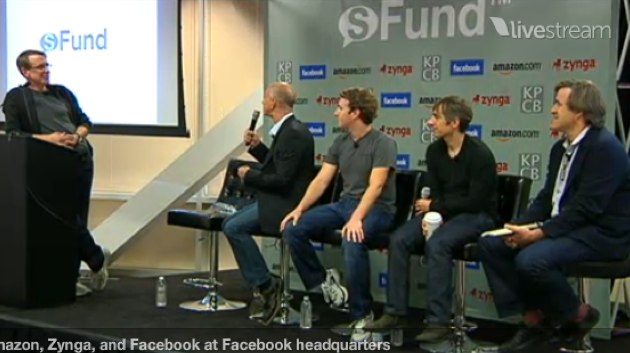 “If you don’t have a social strategy, you better go get one,” said John Doerr in a briefing about the launch of the sFund. It’s a new $250 million fund dedicated to what Doerr calls the Third Wave.

Amazon, Facebook, Zynga, Comcast and Allen & Co. are investing in the new fund, as well as others. The three “anchors” – Amazon, Facebook and Zynga – are also committing to help startups taking investments from the fund. And the CEOs of these companies, Jeff Bezos, Mark Zuckerberg and Mark Pincus, joined Doerr and Bing Gordon on stage today to announce it.

The fund is organized around social startups in all industries – consumer, enterprise, health and mobile. Existing investments Jive, Flipboard and Lockerz would have been sFund investments, says Doerr. And the fund has made it’s first investment already in Cafebots, which announced a $5 million round this morning.

The rise of Facebook is “obvious but important,” Doerr told me yesterday. But the organization of the Internet around social is just getting started. Does that mean there will be lots of different social networks? Gordon says there will be, but Doerr says “Facebook is it.”

That also explains why Google and Yahoo aren’t onstage. When I asked Gordon and Doerr about it, they both said Facebook is the important platform to focus on. And Doerr noted that Facebook has many choices in how they spend resources.

Both Gordon and Doerr say they believe that major industries are just beginning to reorganize themselves around social, and that a lot of disruption is going to happen over the next several years. “We’re making a blue ocean bet that social is just beginning,” said Gordon. “Usage habits will change dramatically over the next 4 -5 years.”

Gordon also told me that he expects the fund will invest in multiple startups that will eventually be as big as Zynga, or bigger.

One thing is clear – Kleiner just made sure that social startups will drop by their offices to look for an investment, whether it’s angel size or bigger. Closing a round with them means that Facebook, Zynga and Amazon will also be indirect investors. That may give them a competitive advantage that they can’t say no to.

The press release is below

October 21, 2010 – Palo Alto, Calif. – Kleiner Perkins Caufield & Byers (KPCB) today announced the sFund, a new $250 million initiative to invest in entrepreneurs inventing social applications and services. Amazon.com, Facebook, and Zynga, the leading companies defining today’s social and online environment; entertainment and media leaders Comcast and Liberty Media and Allen & Company, LLC, have committed to invest in the sFund and serve as strategic partners. The sFund will provide financing, counsel, and relationship capital for a new generation of entrepreneurs to deliver on the promise of the social web.

“We’re at the beginning of a new era for social Internet innovators who are re-imagining and re-inventing a Web of people and places, looking beyond documents and websites,” said KPCB partner John Doerr. “There’s never been a better time than now to start a new social venture.”

The sFund will be led by KPCB partner Bing Gordon, former chief creative officer and longtime executive at Electronic Arts and board director of Amazon.com and Zynga. Gordon said, “Social is just getting started and the opportunities are vast. As in the early days of the Internet, the race is on. Today every business, organization, and entrepreneur should have a social strategy.”

“Social apps are viral, and when they hit, it often happens suddenly, and then they grow explosively. That’s one of the reasons the scalable, elastic, no capex, variable cost nature of Amazon Web Services is ideal for social apps,” said Jeff Bezos, founder and CEO of Amazon.com. “The top three companies that develop for Facebook all use AWS.”

Mark Zuckerberg, CEO of Facebook, said, “The Web is being rebuilt around people, and we’re at a point where any app, website, or device can be designed to be social from the ground up. We’re focused on enabling entrepreneurs to build companies that can disrupt their industries.”

Mark Pincus, founder and CEO of Zynga, noted, “Zynga’s successes – such as FarmVille and Mafia Wars – show the speed with which entrepreneurs can transform existing industries and invent entirely new ones through social platforms. Our model demonstrates consumers’ desires to connect with others in new and valuable ways.”

Brian Roberts, chairman and CEO of Comcast Corporation, said, “Social businesses play an increasingly important role in our entertainment and communications products. We’re very pleased to be a part of the sFund and look forward to seeing the great innovations that are generated from its investments.”

All anchor investors in the sFund initiative are prioritizing developer services for entrepreneurs, who will be part of an active ecosystem. The strategic partners launching the sFund each bring unique contributions. Amazon Web Services (AWS) will provide AWS Getting-Started Support for one year, priority access to worldwide Startup Events, and dedicated business and technical support. Facebook will contribute access to its platform teams, beta APIs, and new programs, like Facebook Credits. Zynga will host periodic sessions with sFund companies to focus on management and technical development, including open source collaboration. Comcast Interactive Capital, Comcast’s venture fund, will provide access to Comcast’s resources,
teams, and relationships.

Over the past year, there has been unprecedented innovation in social applications. KPCB’s latest social ventures show the breadth of the social opportunity, from seed stage to scale-up, and enterprise to entertainment, including:

– Cafébots — The first company dedicated to Friend Relationship Management. By building applications that are useful, fun, and scalable, consumers will be able to extract more information from and make better use of their social graphs. KPCB led a Series A funding for the company founded by a team of Stanford PhDs.

– Flipboard — The world’s first social magazine, delivering a beautiful, personalized experience of the news, images, and information being shared by your friends across social network feeds on your iPad.

– Jive — Jive’s social software leverages innovations in social to radically change the way work gets done in the enterprise. Jive has over 3,000 customers serving 15 million users. KPCB led a growth stage funding round in July.

– Lockerz — A new social commerce company aimed at ages 13-30 creates a revolutionary new way to shop, play content, and connect. In less than a year, Lockerz has grown to more than 17 million members, offering major discounts on the best fashions, electronics, music, and more.

Go to www.kpcb.com/sfund and www.facebook.com/kpcbprofile, or follow us at twitter.com/kpcb to learn more about the sFund.

Amazon Forward-Looking Statements
This announcement contains forward-looking statements within the meaning of Section 27A of the Securities Act of 1933 and Section 21E of the Securities Exchange Act of 1934. Actual results may differ significantly from management’s expectations. These forward-looking statements involve risks and uncertainties that include, among others, risks related to competition, management of growth, new products, services and technologies, potential fluctuations in operating results, international expansion, outcomes of legal proceedings and claims, fulfillment center optimization, seasonality, commercial agreements, acquisitions and strategic transactions, foreign exchange rates, system interruption, inventory, government regulation and taxation, payments and fraud. More information about factors that potentially could affect Amazon.com’s financial results is included in Amazon.com’s filings with the Securities and Exchange Commission, including its most recent Annual Report on Form 10-K and subsequent filings.