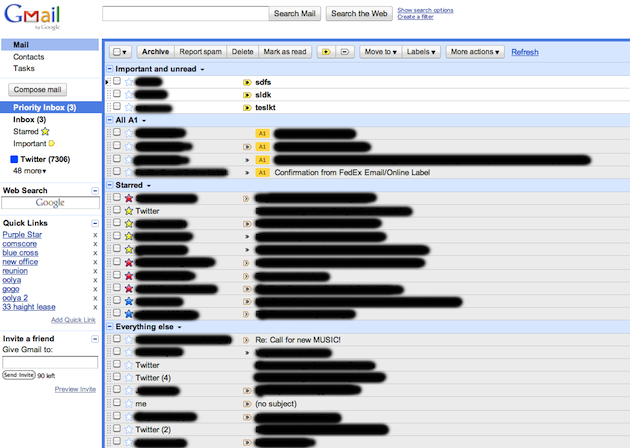 Hopefully you’re reading this as you’re waking up with access to Gmail Priority Inbox. Jason already posted his review/overview last night, so I figured I’d just talk a bit about how I’ve been using it for the past several days since Google turned it on for me to test out on my account. My opinion of it is in-line with Jason’s — once you fine-tune it, it’s game-changingly awesome. There is simply no way I could ever go back to using Gmail without it enabled. So how have I tuned it?

First of all, before you get started, I highly recommend that you watch the overview video Google made for the feature. It’s two minutes long, and makes the basics easy to understand. For most people, the basics are probably good enough. But for people who get a lot of email, you’re going to want to go a bit deeper.

My favorite aspect of Priority Inbox is the settings that allows you to create four different sections of your inbox. Yes, you could previously do this with the Multiple Inboxes feature, but these new settings make things much easier to understand and implement. The three default sections here are: “Important & unread,” “Starred,” and “Everything else” — but there’s an option to add a fourth, which you should. You should create a new label that you can quickly tag emails with. For example, I chose “A1” since “A” shows up first in the Labels drop down menu. Set this section (which is actually the second section) to show emails with that label.

Once you do that, your inbox will be transformed into four different boxes stacked on top of one another. At the top will be the “Important and unread” elements — this is your true Priority Inbox and ideally would be empty most of the time (indicating that you’ve read all these messages). Below that would be this new A1 section — these are your most important saved emails to come back to. Below that is your starred section — these are emails you quickly star that you might want to come back to. And below that is everything else — your general incoming email. Or as I like to call it, Hell.

What’s great about this new “Everything else” section is that it filters out the stuff you already have in one of the upper sections, so things aren’t repeated. The regular Gmail inbox does not do that.

With this four-level hierarchy in place, you basically have a mountain of email that trickles down from most important to least important in an easy-to-digest manner. This is arguably more vital to me than the actual Gmail filtering of important messages.

That said, the filtering is still pretty killer when you first open your inbox each day. To me, the most impressive thing about it is how quickly it learns. On day one it was fairly hit or miss. But now, on day five using it, it’s scary accurate. And I suspect it will keep getting better. Part of that is me creating new filters for things to absolutely not tag as “important” — but most of it is simply hitting the “important” or “not important” buttons.

Again, all of this is really no different from basically what you could do before with a combination of multiple inboxes and your own highly-tailored filters. But with Priority Inbox, you don’t have to spend all that time making those filters — something which most users are never going to do. Instead, you just spend time teaching Gmail what’s important and what’s not by clicking the buttons, or simply reading/not reading certain messages. 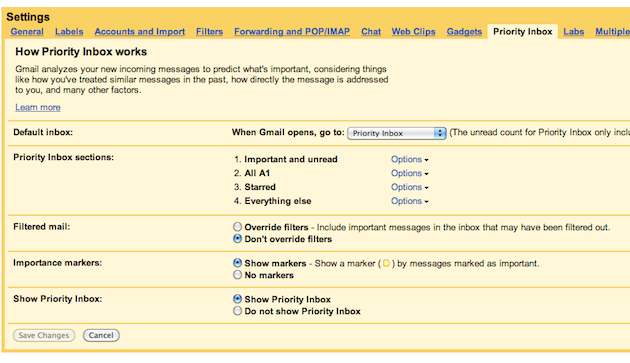 It’s weird, but I actually look forward to opening Gmail each day now just to see how well Priority Inbox has filtered everything. I also find myself feeling less overwhelmed when I come back to my inbox midday. That said, this still doesn’t solve the fundamental problems of email: namely that there’s too much of it, that it takes too long to respond to, and that it’s considered proper etiquette to respond to each message.

I would estimate that I get about 100 to 200 emails a day — plus another few hundred that are sent to general work accounts that I have access to. If I tried to read and respond to each and every one, it would take hours. It’s simply not possible if I still want to get work done. The main problem is all the clicking required. Click to open, click to respond, click to send. All of this, plus the seconds spent loading after each action, adds up quickly. And this combined with the fact that expectations are usually such that you respond more formally to emails — again, Hell.

That’s one reason I love Twitter. It’s a stream. There’s nothing to open, things just float by. When you want to respond to something, it’s one click — nothing new has to open. And it’s a click to send, but there’s no box that closes after (at least not on twitter.com) and there’s no need to have to reorient yourself. Further, the 140 character limit gives you the best excuse in the world to be brief. People used to bitch and moan about this limitation hampering conversations — I think it’s the single greatest aspect of Twitter — by far. And, of course, there’s no built-in notion that every message necessitates a response. It’s wonderful.

It seems as if everyone is always sure we’re on the verge of some startup solving the fundamental email problems. But I’m simply not sure that’s even possible. Even if something is truly great, it would take a large amount of both luck and time to get everyone in the world on board in the way they are with current email systems. Twitter or Facebook are the closest, but when you think about it, they’re really not all that close.

Instead, it may have to be one of the established players that rewrites the rules. Of those, Google with Gmail is clearly doing the best job. But even Priority Inbox isn’t a rewriting of the rules, it’s simply an organizational tool that makes everything seem better. But believe me, I’ll take it.