Email overload has finally met its match. Tomorrow, Gmail is rolling out a new feature called Priority Inbox that is going to be a Godsend for those of you who dread opening your email. In short, Google has built a system that figures out which of your messages are important, and presents them at the top of the screen so you don’t miss them. The rest of your messages are still there, but you don’t have to dig through dozens of newsletters and confirmations to find the diamonds in rough.

The beauty of the system lies in its simplicity — it’s nearly as easy as Gmail’s one click spam filter. There’s almost no setup: once it’s activated on your account, you’ll see a prompt asking you if you want to enable Priority Inbox. You can choose from a few options (the order of your various inboxes and if there are any contacts you’d like to always mark ‘Important’) but don’t have to setup any rules or ‘teach’ Gmail what you want it to mark important. It just works, at least most of the time.

The system uses a plethora of criteria to decide which messages are most important: things like how frequently you open and/or respond to messages from a given sender, how often you read messages that contain a certain keyword, and whether or not the message is addressed solely to you or looks like it was sent to a mailing list. If you come across a message that’s been marked important when it shouldn’t have been, you can hit an arrow to tell Gmail it’s messed up. Likewise, if a message that should have been flagged gets sent to the ‘everything else’ area, you can promote it. Through these actions Gmail gets progressively smarter, so the system should work better over time.

I’ve been using the service since late last week and have found it to work very well. Occasionally messages that shouldn’t have been marked ‘Important’ are flagged, but I’ve yet to encounter an urgent message that slipped into the ‘everything else’ section. My colleague MG Siegler, who has also had the feature active, has had similar success.

It’s great. I love it. But it isn’t perfect.

My biggest gripe so far is the fact that there’s no way to tell why a given message has been deemed important. Oftentimes it’s obvious — emails from my coworkers are generally given the golden arrows, as are messages from PR contacts whom I frequently communicate with. But occasionally there are oddballs that have been marked important for no apparent reason.

Sure, it’s easy to tell Gmail that ‘this message is not important’ and strip its golden badge. But what if the message was marked important for a reason that is usually sound (perhaps it contains a reference to TechCrunch Disrupt, for example)? It would be nice if I could tell Gmail something to the effect of “this sender is never important”, but not to start frowning on whatever keywords the message contained. Still, it’s a great start.

Of course, this introduces a new dynamic to the way a lot of people are going to be reading email. Email intros will become ever more important, because you’ll want to ensure that your message gets marked with coveted ‘important’ tag.  It also has much broader implications. Increasingly, content will be displayed to you based on its importance rather than its time stamp — not just when it comes to browsing email, but for social networks and other content as well.

Priority Inbox will be rolling out to Gmail and Google Apps users alike over the course of the week. 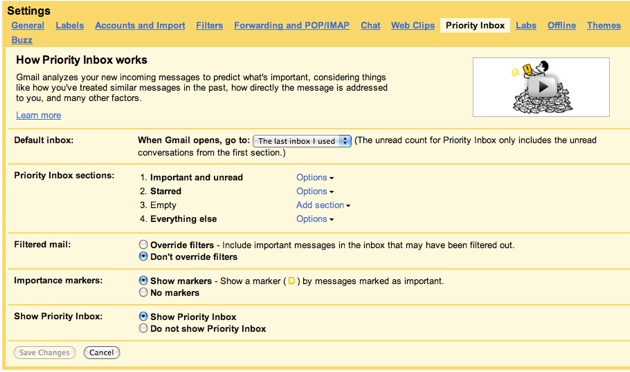