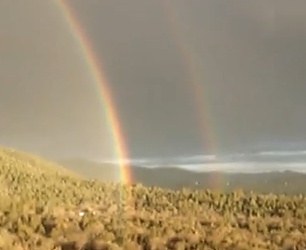 Perhaps you’ve heard: Apple is having an event tomorrow. Normally, this means that a sea of tech bloggers descends upon the Bay Area to cover it live for those sitting by their computers at home. But this time things are a bit different: Apple is actually streaming the event live — something they haven’t done in a very, very long time. Cue Double Rainbow: what does this mean?

It’s been so long since an Apple event has been live streamed that no one can seem to agree when the last one actually was. The consensus seems to be that it was a Macworld keynote (which IDG put on but Apple produced) back in the 2003 or 2004 timeframe. But what’s interesting is why Apple streamed one of these last ones: as some recall, it was at least in part to show off their then-new streaming technology — QuickTime Streaming Server. Might that be a hint about the intentions for tomorrow’s event?

Specifically, I’m wondering if Apple is streaming this event because streaming media will be a key part of the event. iTunes-in-the-Cloud is the big streaming service everyone is waiting for — but all indications are that this is still not ready to go just yet. What does seem ready to go are things like Netflix for the new iTV device. Guess how that would work? Yep, streaming.

What’s not yet clear is if Netflix has built an app for this new device just as they have for the iPhone and iPad, or if Apple worked with them to build it into the system. If it’s the latter, it’s certainly possible it will be using the “industry-leading HTTP Live Streaming” Apple is touting in their live stream press release. Interestingly enough, HTTP Live Streaming is also a part of Quicktime Streaming Solutions alongside the aforementioned Quicktime Streaming Server. 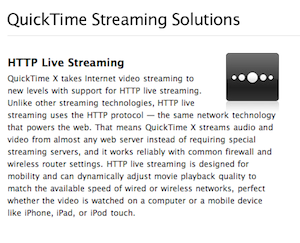 The other streaming wildcard here are the rumored new $0.99 television show rentals. It’s certainly possible that these will be downloadable content like current iTunes movie rentals — but perhaps Apple is intending to test out new streaming capabilities with them as well. After all, this new iTV is thought to only have something like 16 GB of storage space on board — that’s enough for only a handful of television shows in HD. You’d really have to rent them and them watch them right away if they are downloadable.

So while it’s entirely possible that Apple just randomly decided to flip the switch to start streaming their events live after all these years — it seems just as likely that it’s a calculated move by Apple to tie everything they’re doing with streaming together around this event. If that’s the case, you can bet CEO Steve Jobs will mention it on stage — something like “it’s the same technology we’re using to stream this to all those people on Apple devices watching this live around the world right now!”

They just better hope the stream holds up. If not, us lowly bloggers will still be there as backup.

Update: A number of people have commented that the live stream may be a direct reaction to the issues Jobs had during the WWDC keynote getting his iPhone to work with the WiFi because of all the signals in the room. That’s definitely a possibility as well — you can imagine Apple telling guests to turn off WiFi hot spots in the beginning and noting that the entire event is being streamed if they’re worried about their readers missing anything.

That said, Yerba Buena (where the event is being held) is much smaller than the keynote room in Moscone West. That means there will likely be a lot less people with WiFi devices.

Still, you can imagine Jobs wanting to do everything possible to avoid the awkward situation last time.

Update 2: Others are suggesting this may be a test of the new massive data center Apple has built in North Carolina. We do know that is coming on line at some point this year, so it’s certainly possible.