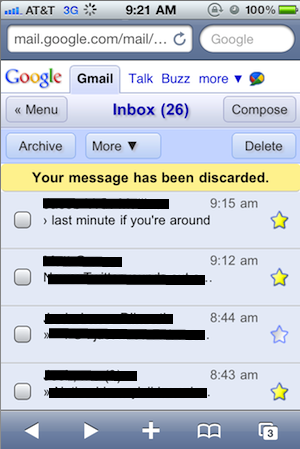 Update: Google has just informed me that the version of Gmail for iPhone in my picture is actually an old version. My bad. That said, their statement makes it clear that they are testing out new versions, so not all is lost.

Google doesn’t have a native app for Gmail on the iPhone. I know, it sucks. Thankfully, their mobile Safari-optimized version is pretty damn good. But it’s not perfect. And they’re working to make it better.

This morning, I loaded up the mobile version of the site on my iPhone as was greeted by a shiny new version. The entire look and feel has been mildly revamped: everything is a slightly darker blue hue, and the buttons are now more rounded. But more significantly, buttons have been shifted around — and one key one has been removed altogether.

As you can see in the screenshot, the new Gmail header bar now simply has a “Menu” and a larger “Compose” button alongside the unread count. Gone is both the search button and the reload button. This version wasn’t live long enough for me to check where search went, but I do know that it was auto-refreshing so the reload button was no longer necessary.

If added, this will be a very nice addition. Currently, you have hit the reload button to get new messages as they come in to your account on this mobile version. On the regular web version of Safari, obviously, this is not the case.

This alongside the new Push Notification-enabled version of the Google Mobile App for iPhone makes for a much better push experience with Gmail on the device.

Also new in this update to Gmail is a secondary bar below the main bar that contains the “Archive,” “More,” and “Delete” options. In the current version, these only appear as hover items when an individual message is selected.

“We’re always experimenting with new products and ways to enhance and improve our current products. We don’t have any specific plans to share at this time,” is all a Google spokesperson will tell us about the changes.

Considering Google just updated the version of Gmail optimized for the iPad (though this is different looking from that), you can probably look for this revamp soon.