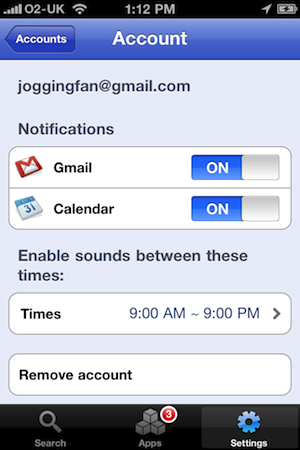 I’d wager that you’d be hard-pressed to find an iPhone user that doesn’t use Gmail on the device. And yet, it’s an awkward relationship. Why? Because Gmail run through the iPhone’s native mail client is a crippled experience. Set aside for a second that you cannot star anything (well, aside from moving an email to the “Starred” folder, which is ridiculous), more importantly, there is no push support. This means you cannot get your email in realtime. Instead, you have to ping Gmail’s servers (either in set intervals or manually). Both Yahoo Mail and MobileMe mail have full push support. It’s ridiculous. Google finally made a move to fix that today. Well, sort of.

With the latest version of their Google Mobile App, you can set up your iPhone to receive Push Notifications each time you get a new Gmail message or when you have a Google Calendar alert. No, Push Notifications on the iPhone aren’t technically the same as full push support for mail, but it will do. Essentially, you’ll now be getting a notification when a new message comes in and this will alert you to open your Mail app and retrieve it. It’s two more steps than regular push would require, but whatever.

Perhaps even stranger is that you can actually set up Gmail to do proper push — but you have to use Microsoft Exchange to make that happen. Or you’ve been able to use a number of third-party apps like Boxcar for some time now that allow you to get Gmail push notifications — this new Google app simply cuts out this middle man, but works the same way.

There’s something else interesting about this Google Push Notification support as well. When it pops up the notification letting you know that there’s a new message, there’s a “View” button which will open Gmail in the iPhone’s web browser. So not only is Google bypassing Mail’s lack of Gmail push support, they’re feeding you back to their site. While they don’t do it yet on the iPhone experience, they could presumably show you ads here — something they can’t do on the Mail app on the iPhone. I’m fine with that as the iPhone-tailored version of Gmail in Safari is great.

Something else interesting in all of this is that Apple and Google have still presumably been working together to improve the Gmail/iPhone experience. With iOS 4, we finally got the ability to archive (instead of delete) in the Mail app. And you can now sync notes with your Gmail account. Why there still is no real push support is anyone’s guess. I’m sure each side will blame the other one.

Also interesting to think about: will Google start using this same Push Notification feature to make Google Voice easier to use on the iPhone? We’re all still waiting for the App Store approval of that app.