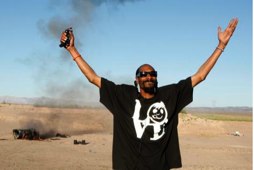 One of Zynga’s newest game titles, Mafia Wars Las Vegas, kicked off with a bang last week as rap star Snoop Dogg blew up a 4-ton armored truck in the middle of the desert in Nevada. The event, which took place last Thursday, broke a Ustream record for the most viewed original event with more than 2 million live views. You can see a video of the explosion below.

Zynga streamed the event, which commemorated the game reaching 10 million visitors in two weeks, live via Ustream, and more than 2 million viewers dialed in simultaneously, making the stunt the most viewed one-time event in 2010. This is actually pretty impressive considering that popular TV shows like The Office and 30 Rock generally get 2 million households viewing the television events. The Zynga event was also only surpassed by Ustream’s broadcast of Twilight: Eclipse in June, but this wasn’t an original web event created specially for Ustream.

It’s a little absurd for the City to use such aggressive language towards the marketing campaign; especially considering that the advertising agency responsible for the stunt seems willing to cooperate with officials.

On another note, it’s interesting to see Snoop Dogg getting involved with another social media event/campaign; the rapper seems to be turning into the new Ashton Kutcher these days. Snoop seems to have an affection for location based social network Fousquare and also recently partnered with PlaySpan to peddle his branded virtual goods.