As you may have noticed, Apple’s online store has been down the past few hours. The reason? New products. Most people seemed to be aware that new Mac Pros and iMacs were coming, but something new was just released too. Meet: the Magic Trackpad.

As anticipated last week thanks to an FCC filing (and rumored months before that), the Magic Trackpad is basically a trackpad that you would find on a MacBook or MacBook Pro reworked as its own stand-alone Bluetooth product. “Why should notebooks have all the fun?,” Apple notes.

With the Magic Trackpad, you’ll be able to use all the same multi-touch gestures you’re used to on your MacBook on any Mac. It’s also the largest multi-touch trackpad out there, Apple says, as it has 80 percent more area than the trackpads found on the MacBook Pros. If placed alongside the Apple wireless keyboards, you’ll notice it’s the same basic size (just not as wide, obviously).

The multi-touch gestures Apple is highlighting include the two-finger scroll, the three-finger swipe, and the two-finger rotate. There are a host of others as well, such as four-finger swipes up or down to trigger Expose. These are all things that MacBook Pro users will be well aware of.

The entire thing is also clickable, just like a MacBook trackpad. In other words, you can ditch your mouse with this product, if you want to.

Speaking of the mouse, the Magic Trackpad follows the release of Apple’s Magic Mouse, which brought some limited multi-touch functionality to Apple’s desktop machines. All of this is a part of Apple’s overall movement towards touch computing — it’s no coincidence that the iPhone, iPad, iPod touch, and all Macs now incorporate multi-touch to some degree. Apple clearly views this method of input as the future.

Apple is selling the Magic Trackpad starting today for $69 — the same price as Magic Mouse. The trackpad runs on two AA batteries — and Apple has a new battery charger product for AA batteries being launched today also. Apple says that the thing should work for “months” at a time as it sense periods of inactivity and powers down. Thanks to its Bluetooth connection, you can use it up to 33 feet away from your machine — something which may be nice if you have one of the new Mac minis hooked up to your TV.

Sadly, Magic Trackpad requires OS X Snow Leopard (10.6.4), presumably because of some of the newer multi-touch gestures built-in to the OS. 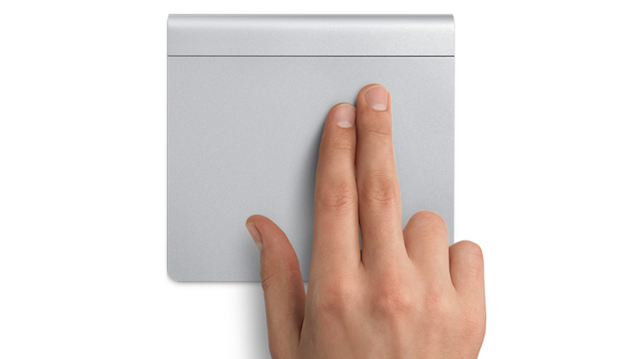