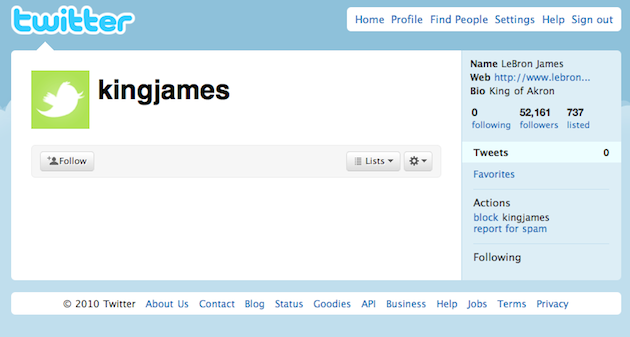 The world is waiting to know where basketball star LeBron James is going to sign. The free agent is expected to make his decision some time in the next few days, and you can undoubtedly expect a large press conference to follow. But could it be that he’d tweet out his decision first? Perhaps.

All indications are that James has just joined Twitter under the name KingJames. It’s not a verified account yet (we have a message into Twitter about that — they’re looking into it), but the best indication it’s real is likely from fellow NBA star Chris Paul — who is James’ best friend in the league. Two hours ago, Paul tweeted out, “**Couldn’t convince him to tell me which team he’s goin to but convinced him to join twitter lol…my brother from another mother @KINGJAMES“.

So either both of them are playing a trick on Twitter, or that is really James. Other reports seem to confirm it’s him as well.

Assuming it is him, James has yet to tweet from the account. But he already has over 50,000 followers — a number that will undoubtedly surge if and when it’s proven to be him. His timing is certainly interesting. It certainly doesn’t seem out of the realm of possibility that his first tweet will be about where he’s going to end up. That would be a tweet heard ’round the world.

His bio currently reads “King of Akron” (he’s from Akron, Ohio), but that could change if he decides he’s leaving Cleveland to play elsewhere.

Over the weekend, the NBA actually paid Twitter to have James’ name as a Promoted Trending Topic to promote their own free agency coverage.

Update: And here he is now tweeting away. 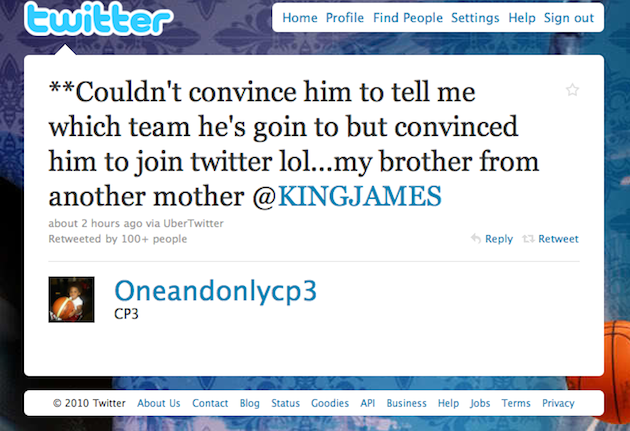