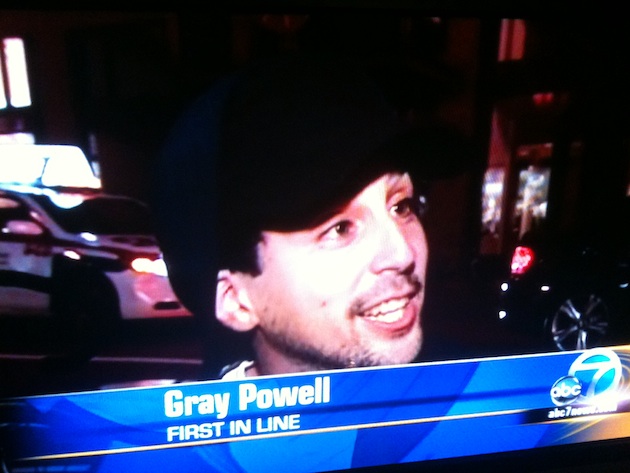 Sometimes coincidences are almost too good. Is this one?

By now, you’ve heard the story about the unfortunate Apple engineer who lost his iPhone 4 prototype at a bar one evening. Gizmodo, the site which ended up purchasing the prototype, also outed the person who lost it: Gray Powell.

This evening, local Bay Area affiliate ABC7 led off their coverage of tomorrow morning’s iPhone 4 launch with the Gizmodo story. They then went to one of the local Apple Stores to interview the first person in line. What they failed to realize though just how coincidental this man’s name was. Yes, Gray Powell.

Let me repeat this to be very clear: the man first in line to buy an iPhone 4 in San Francisco is apparently named Gray Powell.

Now, I didn’t see the segment, so it’s entirely possible that a mixup in the graphics led to what seems to be an extraordinary coincidence. But the person who tipped this to us did see the segment and thought the name sounded a bit familiar when ABC said it.

So that leaves the possibility that this man in line gave a fake name, perhaps to pay homage to the Apple engineer. But would someone clearly looking for publicity by being the first in line at an Apple Store for such an event really give a fake name? That would be a true fanboy.

Regardless, I’ll play along and assume that this man’s name really is Gray Powell. But then I’m also going to assume it’s not that Gray Powell. All I have to go on is the few pictures other publications posted of the Apple engineer after the incident (and at least one sort of makes the two look the same), but I’m going to go out on a limb and say I don’t think it could possibly be him.

Instead, it appears that the man who lost the iPhone 4 shares the name of a man who will be one of the first to obtain the iPhone 4. Spooky. Or is it?

Update: Wow, okay, you really can find anything on the Internet. Sadly, I’m going to have to break up the fun here.

It turns out “Gray Powell” is actually a guy named Joe. My advanced facial recognition confirms this. Joe is a man who paid $400 (via airbnb) to secure his spot from another man to be first in line at the Stockton St. store in San Francisco.