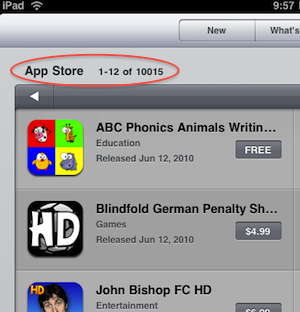 During his keynote address at WWDC on Monday, Apple CEO Steve Jobs rattled off some key statistics. Among them was that there are 8,500 native iPad apps. Actually, at the time, Apple had over 9,000, but we’ll let that slide. How do I know how many app there were? Because unlike other stores Apple oversees, they actually posts the number of apps available for the iPad. And that number just hit 10,000.

If you go to the App Store app on the iPad and click on the “Release Date” area, you can see the total for yourself. Along the top of that area, it will read “1 – 12 of xxxx” — “xxxx” being the current number of apps that are built to run on the iPad.

Back at the end of April, it was reported that Apple was approaching 5,000 iPad apps (actually, they were past that number at the time). That means that in about six weeks, the iPad App Store has doubled in size. Given the iPad’s stellar sales, this is hardly a surprise.

Recently though, a number of developers have noted a long-than-usual wait time for app approvals. One is Reeder, an awesome iPad feed reading app (which was just approved after waiting for a couple weeks). One reason for the delay is likely that Apple is trying to get iOS 4-compatible apps approved in time for the launch of that OS (and the new iPhone 4) in a couple of weeks.